Have you ever experienced something so wonderful that you wanted everyone else to experience it, too? Only it was so magical and special that you had trouble putting it into words? We were invited to see Cirque du Soleil Kurios in Boston for review purposes and I have been trying to figure out how to convey just how captivating it is. I’ll just put it out there now that I won’t do it justice. We recently saw Toruk, which I enjoyed quite a bit, but I felt it was a departure from Cirque du Soleil’s typical shows. It had less traditional circus arts and a more tangible storyline with quite a few special effects. Kurios swings back around to a more pure form of circus relying more on the artistry of the performers than grand lighting and visual displays. Set in a steampunk world, Kurios lets the circus arts speak for themselves and they do so with awe-inspiring brilliance. 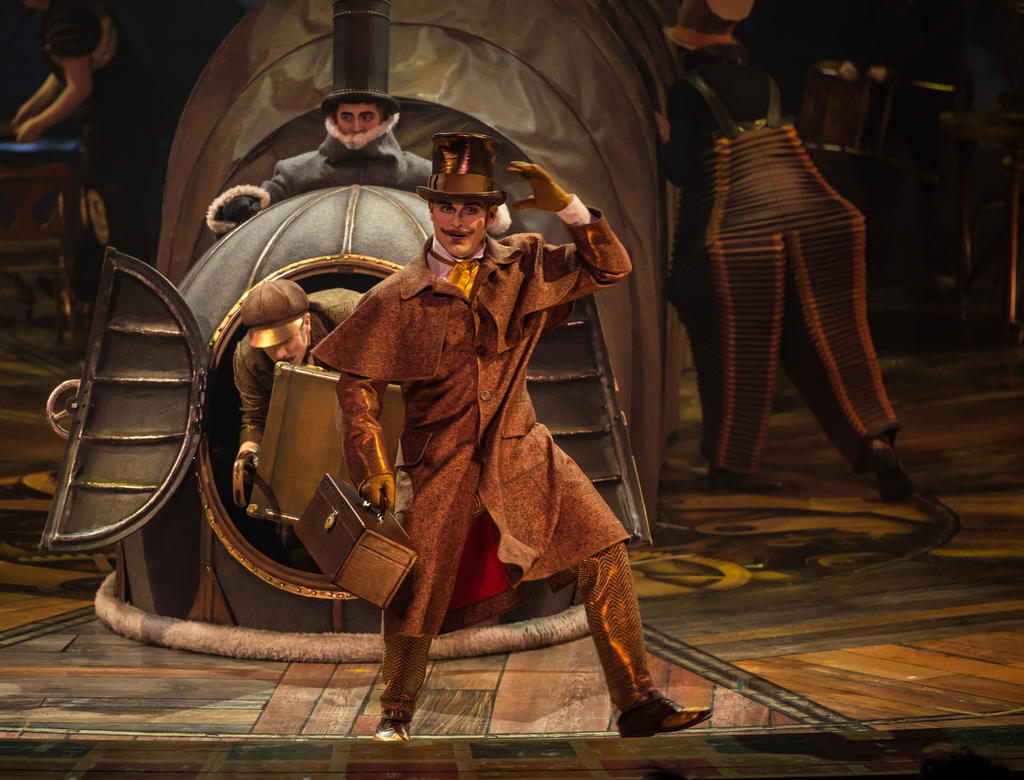 Steampunk is an industrial science fiction genre that relies on the use of steam-powered machines. It’s got a sort of 19th-century vibe, and you’ll often see a lot of gears, metal, and leather in costuming. There are also a lot of fantastical machines like automatons and dirigibles. It is grounded enough to feel realistic while still being fanciful enough to be magical. And it provided the perfect setting for the Kurios world.

I don’t want to give too much away as I want you to enjoy the wonder just as much as we did, but I have to highlight some truly amazing acts. The rola bola act was like none I’d ever seen, with some high flying stunt work going on. Chair balancing is not normally my favorite but Cirque du Soleil gave it a gorgeous twist that became one of the highlights in the show for me. In fact, there were many moments where I thought, “No. That can’t be!” and then it was. This is the mark of an amazing circus show… to display greatness and then push it just beyond belief.

I don’t know if there are awards given out to circus artistic directors, but if there are, I hope one goes to the brilliant mind behind Cirque du Soleil Kurios. The colors were rich, the costumes industrial yet playful, and the sets had so much to look at, even before the show began. I wanted to be a part of the world they created and was so sad to see it come to an end. This is the first Cirque that I would happily see over and over to catch the details that I missed. 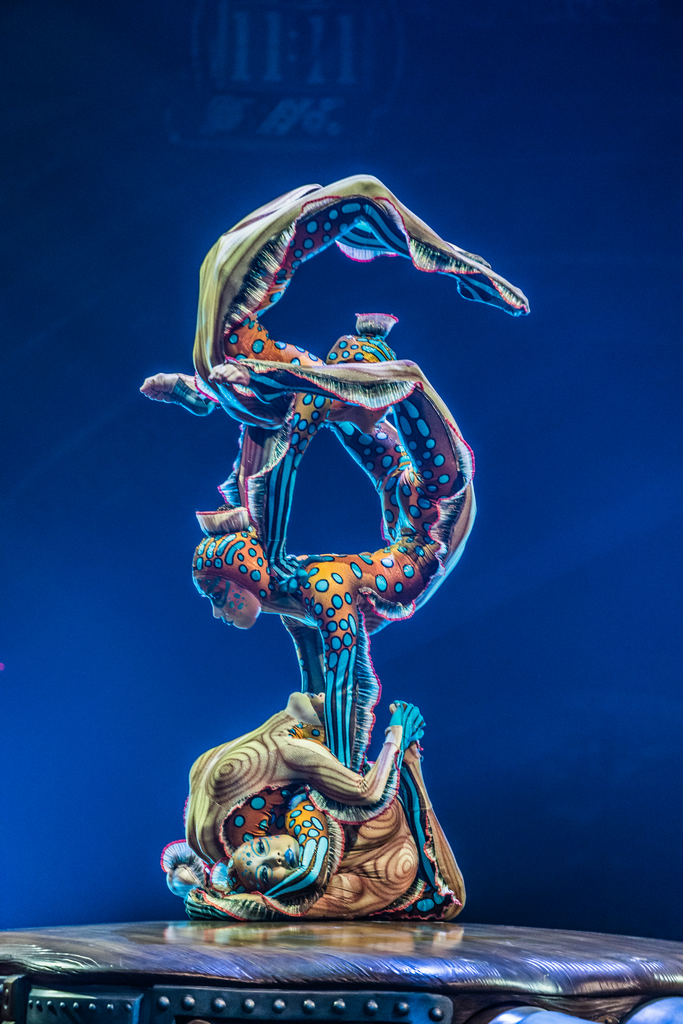 Cirque du Soleil is known for pushing the envelope, and I think that Kurios more than achieved that goal. One of the most awe-inspiring acts, which I don’t even have a picture of, unfortunately, is called “theater of hands.” It is an act done almost entirely with fingers/hands as characters, and magnified so the audience can see. It could have been an entire show unto itself. 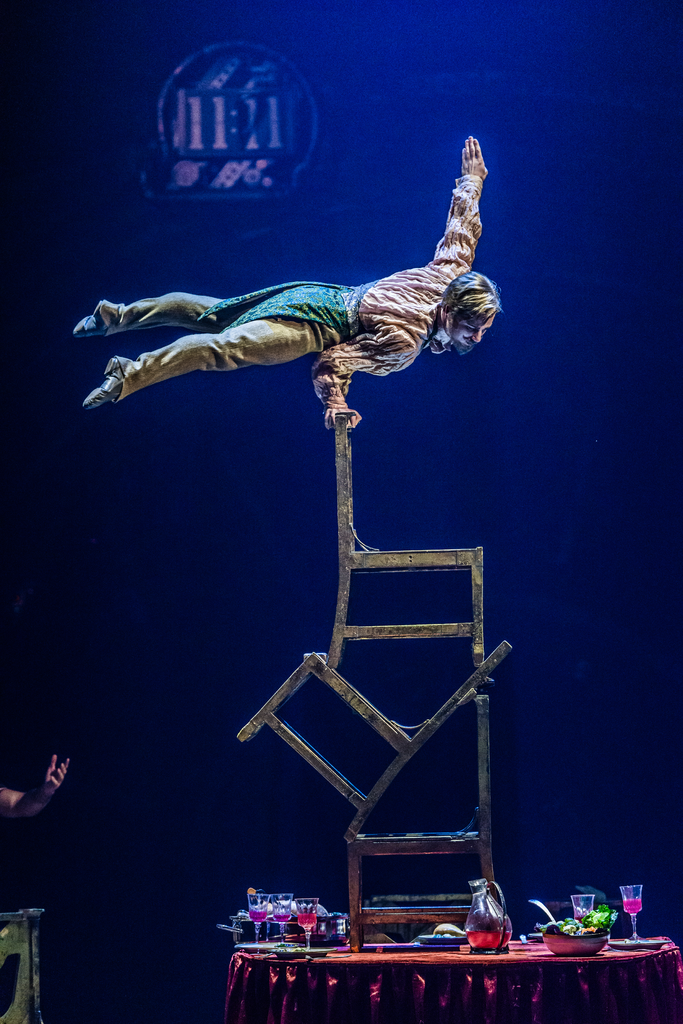 Since my kids are into circus, we like to take note of the variety of circus arts that appear in each show. In this case, it included contortion, hand balancing/chair balancing, rola bola, aerial straps, acro net, a comedy/clowning act, banquine, Russian cradle, aerial bicycle, and an invisible circus. Phew!

Kurios is one of my favorite touring Cirque du Soleil shows for families. It doesn’t have any of the creepiness that I sometimes find in Cirque shows, and while there isn’t a strong story for kids to latch onto, the artistry is compelling enough even for younger kids. The shows starts with a human-run train chugging through the audience, and from that moment, every child I could see (including my own) was captivated. Kurios runs approximately 2 hours and 10 mines, with a 15-minute intermission, so I wouldn’t recommend it for extremely little kids, especially for late shows. But if you have a child who is comfortable sitting for that length of time, they will likely be perfectly content to do so. There is one clowning scene that involves a “date” between an audience member and a cast member. Some of this might be either lost on kids or mildly uncomfortable (ick! kissing! but not really), but other than that, the content was perfectly fine.

My kids were mesmerized by one of the cast members in particular. Antanina Satsura plays Mini Lili and, just to save you from speculation, she is not a child. Ms. Satsura, who is one of the 10 smallest people in the world, is a dainty 3.2 feet tall. Mini Lili the “unconscious mind” of Mr. Microcosmos and lives inside his overcoat!

Whatever you do, make sure to arrive a bit early to see the tent-top pre-show (weather permitting)!

Disclosure: We received complimentary tickets for the purposes of review. No additional compensation was provided. All images/video courtesy of Cirque du Soleil

Lessons Learned from the Circus (Smirkus)

A Magical Journey to Toyland–Walter Wick Studio
← Social Media Buzz on December 17, 1773
Taking Time for Yourself as a Parent →