If I’m being honest, I have to admit that I’m not a huge fan of Halloween. I don’t like coming up with a costume and people with masks on freak me out a bit. The whole door-to-door candy thing is a bit of a pain and, besides, as an adult I can buy whatever candy I want. Now that I’ve got a child with a nut allergy, I like it even less. Trick or Treating causes me anxiety and just the sight of a Reese’s Peanut Butter cup makes me feel like I’m going to break out in hives. But as much as I’m a bit of a Halloween Scrooge, I do really like Halloween decor and motifs. Bats, skeletons, witches, and jack-o-lanterns are cool. [If you’re looking for info on the video contest, it’s at the bottom!] 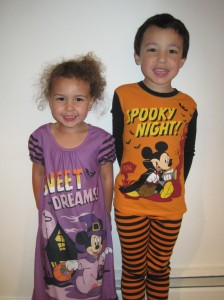 Each year, I enjoy trying to find cute PJs for the kids with Halloween designs. For some reason, I think mini-skulls and bats are adorable. In fact, I usually do a Halloween photo of the kids to share with relatives. Now that Bug is a bit older, though, it’s hard to find matching PJs and I had basically decided to give it up for the year. But then a representative from the Disney Store asked if I’d like to review some Halloween pajamas. Mickey? Minnie? Halloween designs? Of course I said yes.

LadyBug received a purple nightgown with Minnie Mouse on it. Hers is a size too large, as you can probably tell. She loves it, though. She loves the little ruffles on the sleeves and the bottom, and the purple and, of course, Minnie Mouse. I think it’s cute, but I’m a bit perplexed by the short sleeves in sleepwear clearly designed for fall. Yeah, I guess fall isn’t cool all over, but still. The nightgown is also made out of polyester, which I don’t prefer. When I handpick their PJs, I always go for cotton. It’s better for allowing their skin to breathe and to wick off moisture.

Bug got some super-cute Mickey Mouse PJs. Mickey is dressed as a vampire for Halloween. These PJs are long-sleeved and 100% cotton. Very nice! I probably would have opted for two pairs of these for the kids since we do keep our house on the cool side. The PJs and the nightgown (Disney calls it a “nightshirt) retail for $14.50 at Disney Stores and DisneyStore.com.

We also checked out some of the Halloween costumes. They have a bunch of adorable options, including Rapunzel from the upcoming Disney movie, Tangled. We chose Woody from Toy Story and Tinker Bell, two of our household’s favorite movie characters.

The Woody costume, which retails for $39.50, comes with button-down shirt, cow-print vest (with sheriff badge), jeans, boot-style shoe covers and a red kerchief for around the neck. I was surprised (in a good way), by the quality. The jeans are light-weight, but they’re still jeans. And again, the shirt is a shirt with real buttons. If that’s your kid’s style (!), he (or she) could wear it on a normal day. Ok, maybe not, but it’s not just a one-piece polyester jumpsuit like you’d get with a less expensive costume. What I was disappointed in was that it doesn’t come with a cowboy hat. That’s a separate purchase. I feel pretty strongly that for $40, I should have all of the basic parts to make the costume. The gun belt is less important to me, but the cowboy hat does stand out. 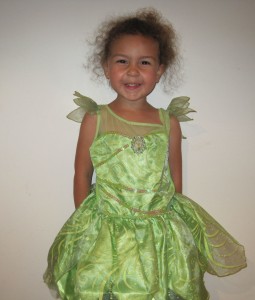 The Tinker Bell costume also retails for $39.50 (on sale at the Disney Store online for $22.99). As it turns out, the designs on the skirt glow in the dark. Lady Bug thought that was pretty fancy. The costume has a polyester top with a skirt made from organza, satin and tulle. It’s got little fluttery sleeves as well. Once again, this is a really nice quality costume. It has a cameo adornment on the front with a picture of Tinker Bell (in case there is any doubt). Lady Bug loves it and doesn’t want to take it off. But you’ll notice something in the picture… no wings. We actually have a couple of different sets of wings. None of them really match, but we can make it work. Pictures of the costume on the Disney Store site include a crown, wings, shoes and a wand. Those are available for purchase separately, but at retail will run you another $60 for the set (they are also on sale right now, so you can snag them for less).

I forgot one other thing I like about Halloween… Halloween-themed movies and TV shows, plus truly scary (not slasher) movies. Disney Living has created a series of three spoofed horror movies that turn out to be greetings from Disney. They’re inviting you to create your own video for a chance to win one of five $100 gift cards to the Disney Store. The full rules are available a PDF here, but I wanted to share one of my favorite “Ghoulish Greetings.” It’s a spoof on the movie, The Ring, which I found delightfully creepy. The contest ends at 11:59pm Pacific Time on October, 31, 2010.

Disclosure: We received complimentary pajamas and costumes for review purposes. There was no promise of a positive review and the opinions contained in this post are my own.

Give a Day, Get a Disney Day – Gone Too Soon
← Croissants, Castles, and Champagne
Mom Bloggers – Let’s Put an End to Cyberbullying →