If you’re local to Burlington, MA, you probably remember that the mall used to have a Disney Store. It closed awhile ago and we were left without a fun shopping experience and quick access to our favorite Disney merchandise. But just this month, Disney returned to the Burlington Mall with one of their magical Imagination Park (IP) Stores.

Each morning at a Disney Imagination Park Store, one young guest is selected to “unlock imagination” using this giant key. The ropes drop, the doors open, and the magic begins. [Note the special design that appears on the tip of the key when you flip it over!] 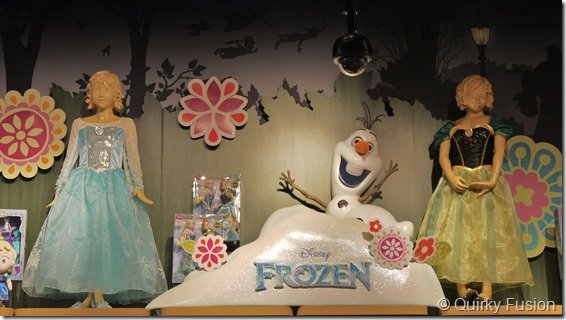 Guests enter and walk along the blue, sparkly Pixie Dust path. The path is flanked by a series of “Storytelling Neighborhoods,” evoking a wide range of Disney properties, such as Frozen.

One of the first sights you’ll see is this bejeweled castle with toys, clothes, and other items celebrating the realm of Disney Princesses. You’ll find a crystal chandelier, turrets and plenty of pink and purple.

The Disney Store in Burlington has two large neighborhoods dedicated to Marvel and Star Wars, a nice counterpoint to all of the princess gear! Along the top of Imagination Park stores, artwork depicts various Disney characters, as well as landmarks that are specific to each location. Above the Star Wars merchandise, Belle and Pinocchio enjoy reading outside of the Burlington Public Library.

Three Magical Trees also line the path, and each one has a number of popular Disney characters hidden in the leaves. Can you see who is hidden in this one?

The Pixie Dust path leads to the Disney Store Theater, a gazebo with seating for adults and kids. A screen plays clips from Disney movie properties (including Star Wars and Marvel), songs, and other surprises.

Kids can use the touch screen to scroll through the choices and add them to a Jukebox-like queue of items to play. And? If you’re celebrating something special, or even something sort of mundane, the cast just may be able to help you out!

A celebration? For me? Oh, you shouldn’t have! Whether it’s your first visit, your birthday, or even your unbirthday, there’s always something to celebrate, so make sure to let the cast members know! When a celebration happens, there is an announcement over the loud speaker. It’s all very exciting. I was pretty giddy and another shopper came over to find out what all the fuss was about. She and her daughter wanted to have a celebration, too! In addition to celebrations, there are other kinds of interactive magical events that crop up, too. You’ll just have to visit to find those out.

I was excited to see so much fun merchandise from Inside Out since it hadn’t even been released at that point. It’s high up there on the list of my favorite Disney/Pixar movies. I can’t quite decide which emotion is my favorite…

The new Disney Store in Burlington, MA is a fun destination, especially if you’ve got kids who aren’t so excited to help out with errands and need a little distraction to keep them going. And the cast members are so much fun! I’ve never enjoyed a site tour as much as I did that day. I honestly can’t wait to bring my kids in for a celebration of their own. They may never want to leave.

Marbles: The Brain Store–Heaven in a Mall

Give a Day, Get a Disney Day – Gone Too Soon