My kids are more than a little obsessed with Disney Infinity. I don’t even know how many hours they have spent playing with it, but I do know that we have every single character (except the super-special Toys R Us editions – even I can’t justify buying two of everything). When they found out that I was reviewing Disney Infinity: Marvel Super Heroes (2.0 Edition)

for Common Sense Media (and therefore here as well), they were beyond excited. I was excited, too. We are genuine fans of the game, and have been looking forward to all of the promised enhancements. I will say, having completed the included Play Set and spent some time building and exploring in the Toy Box, Disney Interactive definitely came through on their promises, but maybe dropped the ball in some other areas.

You have a number of choices for Starter Sets with Disney Infinity, depending on your play style and your budget.

2.0 Toy Box Digital Download – If you already own Disney Infinity, you can download just the upgrade to the Toy Box starting on November 4. It will be $29.99, but there will be an introductory offer of $19.99 for Wii U and PlayStation. You can use your original base, figurines, and power discs to play. This is a nice economical option for those who aren’t into fighting games and just want to build and play with characters without constraint. Keep in mind that if you change your mind, you’ll need to purchase the whole shebang over and above what you’ve paid for the download.

Starter Set – The basic starter set comes with the full game, a base, one Play Set (Marvel’s The Avengers), 3 characters from The Avengers (Black Widow, Thor, and Iron Man), and two Game Discs that allow you to play and customize mini-games (in this case a tower defense game and a dungeon adventure game).

Other set options – There are other options including a PlayStation Exclusive that includes The Incredible Hulk and a special base. There are also a few sets that bundle additional characters and/or Play Sets. Shop around if you know you’ll want more than one Play Set from the get-go.

The basic starter set includes just this one Play Set. I was pretty excited to play as a super hero and to explore that world. I have to say, I was a bit disappointed. If you have played The Incredibles Play Set, this one feels a lot the same. You spend a lot of time running around the city saving people and fighting foes (in this case Loki’s Frost Giants). They don’t generate as often as they did in The Incredibles, but it’s still a bit tedious after awhile. Almost every mission involves fighting Frost Giants. After the wacky activities in the Monster’s University Play Set and the seafaring adventures and puzzles in The Pirate’s of the Caribbean, it all seems sort of bland, and rather like we’ve seen it all before. They’ve also removed the creative play that the previous Toy Sets offered. There will be no customization of buildings and objects. It is what it is. I played through the story in two afternoons and a good chunk of that was devoted to the two boss battles, both of which I found frustrating.

All is not lost because there are definitely some highlights in the 2.0 Edition. Probably the most exciting is the ability to fly. You can get around faster, avoid enemies, and not always have to deal with a vehicle to get you where you’re going. Not all of the characters can fly, of course, but as much as I enjoyed Black Widow, Thor’s flying capabilities made him my favorite. I also really enjoyed the Skill Tree. As your characters explore, they’ll earn points to spend on new skills and abilities. I like having control over what skills to highlight (I am basically a hack-and-slash fighter, so I put a bit more emphasis on offense over defense) and I like that new skills are introduced slowly over time. It has the added effect of making some characters more appealing than others based on their fighting style. Would you rather use a range weapon or get up close in a battle? That may impact your character choice.

One notable change is that a character who loses his/her health will either need time to regenerate or will have to be healed by another player to continue. Much like Skylanders, you can also swap out a new character to continue the battle. This makes multi-player a bit more interesting, but healing takes time and it’s hard to pull off in the middle of a fight. We also found the camera controls during multi-player fighting to be wonky. You always seem to be looking in the wrong direction.

Much like previous Play Sets, you’ll unlock a few challenges along the way, many of which are available to single and multi-player action. They typically involve smashing everything in sight, collecting “collectibles” (those colorful Disney Infinity orbs) and the like. Some require specific abilities, like the ability to fly. 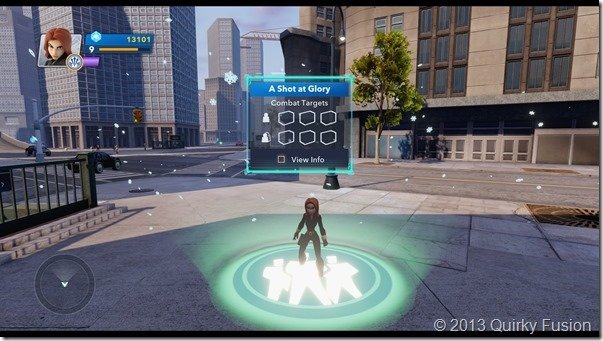 It’s the Toy Box mode that the makes Disney Infinity stand out, and this is even more true in the Marvel Super Heroes (2.0 Edition) version. My kids spend 99% of their time in this mode building some pretty amazing things. My daughter (age 7), in particular, thrives on the creation aspects of the game and designs entire worlds while my son (age 8.5) flies around shooting enemies and racing cars. Somehow they manage to make this work in the same space with a lot less arguing than you’d imagine.

win new items to build with. While that was fun for a day or two, it became frustrating when you needed something specific to build with and had to rely on luck to get it. Now, most of the objects are available for purchase using blue sparks. The shop is organized in trees similar to the Skill Tree, so you may need to purchase other items before you can unlock what you’re looking for. There are also special objects that are unlocked via quests, Play Sets, and through other means. I did miss finding toy capsules with prizes throughout the Play Sets, though. Instead, you’ll find capsules with different colored sparks: blue for in-game currency, orange for speeding along character upgrades, purple for filling your special-skill meter, and green for health. It’s not quite as fun, but it’s certainly more practical.

The thing I was most excited for is called INteriors. It wasn’t implemented quite like I expected, but it’s still pretty cool. You basically get a home base-type of space to build and decorate. Unlike the rest of the Toy Box, this is an interior space, so you can’t walk around the outside. Instead, you’ll add rooms, hallways, stairs, elevators, furniture, and décor to create your own mansion interior. You can then invite the costumed characters to visit you. They’ll have quests for you to complete, like decorating a room to fit their tastes, or placing a certain number of objects. You access INteriors via a special door that you can place anywhere you’d like. I added one to the Haunted Mansion and one to Carl’s House from UP. You only seem to get one INteriors space, but you can add a lot of rooms. You can also use Creativi-Toys to make your own games in there.

One of the challenges of Toy Box is that you often have to do a lot of work to start a new one. The Disney Infinity team realized this and provided a bunch of different tools to make it easier and faster to create. My favorite are the Builders. Put these little folks to work and they can create houses (love these!), cities, and forests. You just let them go as long as you’d like. There are also special Creator tools that allow you to place large chunks of pre-built items. Rather than build a city, for example, piece by piece with 20 or more pieces, one click adds the whole block pre-built. Creativi-Toys, which are really one of the hallmarks of Disney Infinity, have a bit of a learning curve, so now there are templates you can use. Each template is a group of Creativi-Toys, already linked together that you can use in your game. One includes an entire game of Collect the Townspeople (you’ll see the Marvel version several times in action in The Avengers Play Set). Set it down, step on the start button, and you’ve got a game. Another has a “Collection” game with the familiar Disney Infinity collection globes. Move them around for more of a challenge, and then get started. Other templates are simpler, but still act as building blocks for you to add on to. For some reason, there doesn’t seem to be any tutorials for the Creativi-Toys, so be open to some experimentation to figure everything out.

Paring down from three Play Sets to one cut back a lot on actual game play. This is remedied somewhat with the two included Game Discs (more will be available for purchase). These Toy Box games have numerous levels each, and are a lot of fun to play. You have fewer restrictions on the characters you bring in with you (although they do have some restrictions) and you can replay levels over and over. In addition, they show specific types of games that you can create yourself in the Toy Box.

If you, like us, have already invested large amounts in your Disney Infinity collection, you’ll be glad to know that you can use all of your figures and discs in the Marvel Super Heroes Toy Box. They have even been upgraded with their own skill trees. Marvel fans may also be wondering why some characters are limited to one specific world. Have no fear! Some of the Marvel super heroes have the ability to cross-over between Play Sets. You’ll need to collect a set of Cross-Over coins in any given Play Set to unlock the ability for that character to join the fun.

You’ll also want to make sure that you’ve logged into your Disney Infinity account, both on the old game and on the new one. Not only will that allow you to share your Toy Boxes and download those from other players, but it will bring over all of your unlocked Toy Box objects so you can use them in your new worlds.

Despite some disappointment in the included Play Set, I’m still very much in love with Disney Infinity. Disney Infinity: Marvel Super Heroes (2.0 Edition)

adds some fantastic features to the Toy Box, as well as two new ways to play (Toy Box Games and INteriors). They also managed to honor the investment that we have already made, both financially and creatively. Those of you who spent most of your time in Toy Box mode will definitely love 2.0. Those who were more into the Play Sets may have a different feeling. If you have played, I’d love your thoughts as well!

Disclosure: We received a review copy, as well as some additional figurines and discs. There was no additional compensation and the opinions contained in this post are my own. This post contains affiliate links.