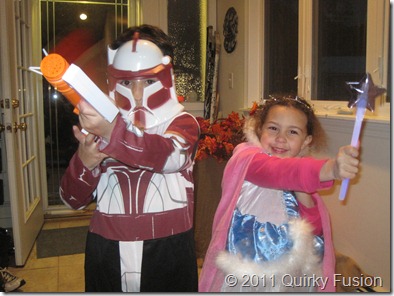 When Big Guy and I decided to have kids, I had some ideas about how I wanted to raise them. My husband had fewer opinions, but seemed on board with the things that were most important to me. I know that you can’t really be prepared for what it’s like to have kids, but now, more than six years later, I’m pretty sure I’ve really screwed up the plan.

We have a few big philosophies, but these in particular stand out:

1. Giving girls the space to be what they want without pressure to do “girl” things. Ah, nature vs. nurture. Do girls like pink and purple because of genetics, or because everyone behaves like it’s a foregone conclusion? Do they play with dolls and favor social play because they have learned to do so from the people in their lives? I think it’s a little of both, but it was important to me to create a space where my daughter could choose her own path. We shied away from the pale pink and purple clothes that many purchase exclusively. We went instead with neutral pastels and bold colors like turquoise, plum, and red. We made sure she had equal access to blocks and cars as to dolls and and play kitchens. It’s challenging, quite honestly, because many family and friends around us still believe that girls prefer dolls over trucks. They give her everything “girly,” while Bug gets all of the engineering toys. I believe that sends a message to both of my children about what they should like and what their roles should be.

2. Guns. I am not a violent person and I don’t believe that violence is generally the best solution to any problem. Big Guy and I have struggled a bit more with this particular area. Not that my husband believes in guns or violence either, but we’re gamers and sci-fi fans, and weaponry plays a role in our hobbies. We both fondly remember Star Wars from our own childhoods and wanted to share them movies with our own kids. But it’s a slippery slope. Is a light saber a gun? Yeah, kind of. And I’m sure my husband thought I was a lunatic when I was furious with him for purchasing a Toy Story 3 Lego set with green army men. Once Bug started school, it became virtually impossible to avoid the influence of guns and a battle culture, even if we hadn’t been great about dealing with it in the first place. This past Halloween, Bug decided to go as a Clone Trooper (they were good guys before they became Storm Troopers). And when I balked about getting him a toy blaster, he counseled me, “It’s just a piece of plastic that makes noise. It’s not REAL.” This is where I had to make a choice. Do I blindly hold onto this rule, or do I make an occasional exception, but use it as a chance to talk more with my kids about the subject. I went with the latter, although it’s an uneasy decision for me. Still, Bug reminds me frequently that his battle play is pretend, while I continue to request less violent games. Lady Bug is younger and it’s hard to tell what she understands and what she doesn’t. This makes the whole situation far more complicated.

There are plenty of other decisions we have made as parents that are the same as some families and different than others. It’s not about right or wrong; it’s about making the choices that we feel comfortable with and that seem best for our family.

That brings us to today. LadyBug is making out her Christmas wish list and it has two items on it. The first is a My Little Pony play set with a slide. For the record, Hasbro doesn’t currently make any. The second? A pink and purple gun. And it is those minutes of parenthood in which you know, without any doubt whatsoever, that you have failed your children.

The good news? Guns are not typically girly, so there aren’t many toy gun options in pink and purple. Sadly, there are more pink toy guns in production than My Little Pony slides. LadyBug is going to have to come up with a new list and I have a whole new parenting challenge ahead. How do I explain that Santa doesn’t really make either of those toys?

Mom and Son Journey to NYC – Taking on the Big Apple, Quirky Style

Back to School Frazzles
← Language Learning with Little Pim–A Review
Support St. Jude and Save on Great Apps →

5 Responses to Pink and Purple Guns