I’m not much of an outdoorsy person, but one thing I do love is going on a hike as a family. As spring arrives each year, I can’t wait to get outside, enjoy the fresh air, and get out away from the craziness of daily life. We’re not climbing mountains, but I do like rambling over branches and rocks, listening to birds and the wind rustling through the trees. When choosing a hike with the kids, we look for something with a varied landscape – water, trees, hills, fields, etc. And, because we aren’t out hiking every weekend, we want something that isn’t too strenuous, but that feels like more than a walk through a park. This time we opted for Sherburne Nature Center and Trails in Tyngsboro, MA. 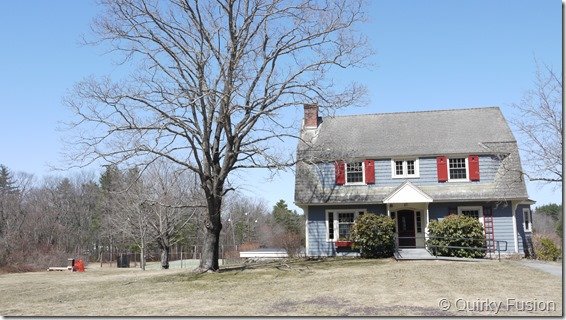 One of several sets of trails in town, Sherburne Nature Center was donated to the town in 1999 by the Sherburne family. In addition to this house, which serves as a nature center, the property includes 80 acres of marsh, fields, and higher forest ground. If you’re visiting, be aware that the house looks like… a house. The day we visited, the sign in front had fallen down and so we had a bit of trouble identifying it.

It was still somewhat early in the season, but typically we’d expect to see a lot more plant life by mid-April. There were some flowers peeking through around the nature center and the bees were happily engaged with them while I was there. There is a man-made bee hive situated on the property, too.

The kids were excited for the fresh air and space to roam. Not surprisingly, LadyBug took off ahead of us through the “field.” At this time of year, it was more of a dead lawn than a field, but I look forward to seeing it as the weather continues to warm up.

Once past the field, there’s a small platform overlooking the marsh area. We didn’t see much on the way out, but when we got back from our hike, there was a beaver swimming around. I was busy taking pictures elsewhere and sadly missed him. 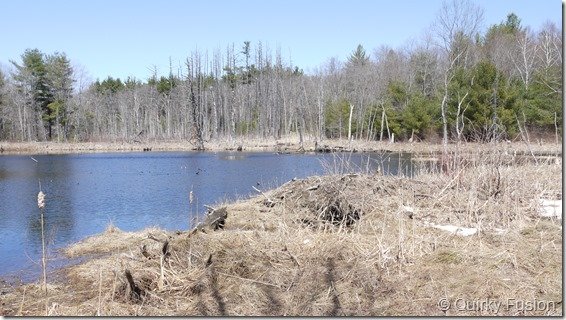 This is the beaver lodge up close.

I’m not sure what it looks like in the summer, but with all of the melting snow, there’s quite steady little brook running into the beaver pond.

There were several small waterfalls along the way. I could have just sat there all day listening to the water passing by.

But instead, it was time to cross the brook and set off into the woods. As always, LadyBug was ready to lead the way!

This was a particularly rough winter with record-breaking snowfalls in a short amount of time. You could see some of the damage from the heavy snows throughout the forest and there wasn’t very much greenery out just yet. This dainty little princess pine was one of the few signs of life on the ground.

In fact, no sooner had my dad and I had a chat about the lack of snow and mud than we ran across both. The lowlands were free of most of the snow and ice and the water seemed to have run off into the brook. The higher ground still had a lot of icy covered ground, as well as large patches of mud.

This fallen tree created a dramatic archway along our path, which took us around the outermost loop of trails. We were out about 2 hours or so, but we were pretty leisurely in our progress.

Another dramatic archway greeted us! This tree is technically still standing…

There were a lot of downed/dead trees along the way. I believe that there is a trail cleanup in the next few weeks, which was definitely needed. In addition to some trash, there were a few spots along the trail where it wasn’t clear how to proceed. A little bit of cleanup usually goes a long way in clarifying the actual trail. It was a really pretty hike, though, even without a lot of greenery. 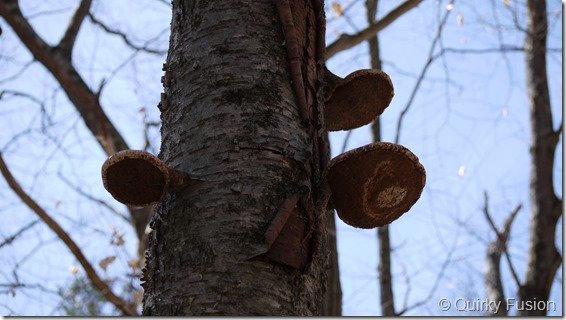 I was captivated by these mushrooms growing high up in the trees. I know that doesn’t mean good things for the trees themselves, but it was still pretty cool to see. 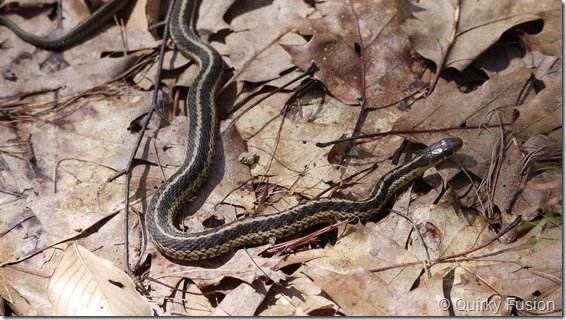 And we stumbled upon this (very) little garter snake, who promptly froze in place so I could take some pictures. I recently learned that the garter snake is the state reptile of Massachusetts. 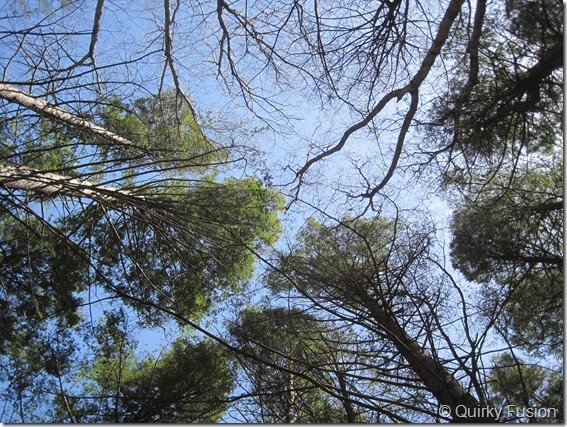 Don’t forget to look up! It was such a beautiful day with the sun shining through the trees. I had to take some upward shots as well!

And as we returned from our hike, this little robin greeted us. He refused to turn around for a photo, but I took one anyway.

The Sherburne Nature Center is a great spot for a hike with the family or even your dog (on a leash). The terrain is relatively flat with only a few slight hills, and most of the trails were wide and clear, even before the spring clean up. There are a few picnic tables at the center, and also plenty of room for old-school picnicking. The center didn’t appear to be open while we were there (on a Sunday afternoon), so do plan ahead around bathroom access.

Freeport, Maine – The Call of the Wild, the Comfort of Home

One Response to Hiking at Sherburne Nature Center, Tyngsboro, MA