I travel regularly, if not frequently, for work-related purposes. Conferences and media events took me away from home maybe 8-10 times this year and my kids have taken it all in stride. So has my husband, but that’s another post entirely. So, when the last time I went to NYC Bug asked, “When do I get to go with you?” I thought, “Why not?” He is nearly 5 and all-in-all a mellow, well-behaved kid. It was just a matter of waiting for something that was going to be work-related (so I could at least somewhat justify the expense), but also kid friendly.  The opportunity arose last week for the Time to Play Holiday Showcase event where the guys at Time to Play Magazine announce their most wanted toy list. I’m not going to duplicate their list here (you can just visit their site to see it) largely because I’ve learned that just because something is “Most Wanted” doesn’t make it the best, or even all that appropriate. Still, it’s always interesting to see what they forecast to be the in-demand items for the holiday season. I’ll be sharing my gift list selections in the next few weeks.

For some reason, hotel rates were absurdly high, even by downtown Manhattan standards. But I did my homework and stumbled across a reasonable rate for the Comfort Inn Times Square. Then I booked us on a ridiculously early train ride into the city and hoped for the best. I figured we’d spend one day hanging around Times Square and the next at the showcase.

We got up at the crack of dawn and drove to the train station. When I woke Bug up, he said, “But it’s not time to be awake yet. It’s still dark outside!” So true, little guy. He was such a good kid on the train. He played some games while I took a nap (couldn’t manage to convince him to do the same) and enjoyed watching the scenery go by. Penn Station was a bit of a shock, I think, but he was a trooper and stuck right by my side. And then the wonder of the cab ride. That alone was a thrill, but no car seat? A whole other level of cool. We ooh’ed and ah’ed at trucks, other taxi cabs, fire trucks and the sea of massive buildings before getting to the hotel. I was a bit nervous about the hotel, since I had never stayed there before and I was there with Bug. I’m not super picky for myself, but I am for my kids!

It turned out that we spent quite a bit of time at the Comfort Inn, due to the rain and Bug’s new set of LEGOs (read on!). The room was small, even by NYC standards, but clean and nicely decorated. Just a block or so outside of Times Square, you couldn’t ask for a better location. Plus it had free Internet access and continental breakfast. Woot!

The highlight of the trip for Bug was most definitely the visit to the new LEGO store in Rockefeller Square. I let him pick out an “early birthday present” and then he was done. He just wanted to back to the hotel to put it together! We also stopped by the NHL store to shop for a gift for Big Guy and the Nintendo store. One of two lows in the trip was wandering around in the rain trying to find a pizza place. Bug, who isn’t the most coordinated child out there, kept slipping and falling on the metal grates in the sidewalk. Ouch!

That night, we went out to Toys ‘R Us, where I thought he’d ride the Ferris Wheel, but he was too scared. Instead, we wandered around the store picking out possible birthday gifts and keeping track of all of the things we already have. Doing toy and video game reviews can make for some spoiled children! For dinner, we went to TGI Friday’s in Times Square. Never, ever go there, no matter how hungry you are. First of all, my salad was $20+. For a salad. Second, it was frozen. The manager actually had the nerve to come over and apologize that my salad was “too cold.” “It’s not ‘too cold’,” I told him. “It’s FROZEN.” He offered me a new salad or some small percent off. I was pretty ticked, but it was too late to order something else, especially another frozen salad, and I didn’t want to cause a scene with my son there. I was honestly angry enough that I might have simply paid for the other dish and walked out. 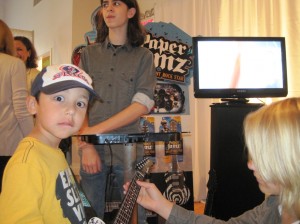 The next day was the A Time to Play event. Bug was excited, but he wasn’t so thrilled to have to sit through the presentation at the beginning of the event. He just wanted to check out the toys. It was challenging to do my job while keeping him from destroying the toy displays in his enthusiasm. I did appreciate the PR people who were so nice to him. The folks at MEGA brands, HEXBUG, Disney, Crayola, Hasbro, Microsoft and Wowwee to name just a few. We went home, as always, with a ton of toys, many of which you’ll be hearing more about soon. My little guy was tired, but happy on the train ride home. He couldn’t stop talking about his time with Microsoft Kinectimals and reenacting the game play he had been taught.

Bug spent a lot of time during the trip talking about how nice it was to be there without his sister. I honestly couldn’t blame him since she’s very good at torturing him at home. But a week or so later, when something had reminded him of NYC, he turn to me with a question. “Mama, next time we go to New York, can we take two kids?”

“I thought you enjoyed being by yourself in New York?”

“I did. But I think it’s more fun with two kids. Then you have someone to play with and stuff.” Hug for that one, little guy. And I’ll remember that next time you tell me you wish you didn’t have a sister!

Taking Time for Yourself as a Parent

One Response to Mom and Son Journey to NYC – Taking on the Big Apple, Quirky Style