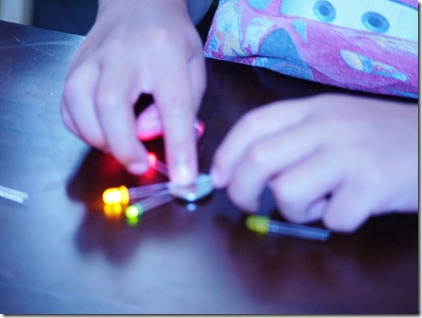 Before you roll your eyes at me, we’re going to start with a super simple and inexpensive circuits project that packs a lot of punch, especially for younger kids. You can then  use the LEDs in projects based on your interests and what you have around the house.

What is a circuit?

A quick science lesson here. A circuit is a closed loop for electrons to travel. You need an electrical source (such as a battery) and a conductive material (such as copper wire). To make things interesting, you’ll also want something that lets you know that electricity is flowing (in this case, an LED). 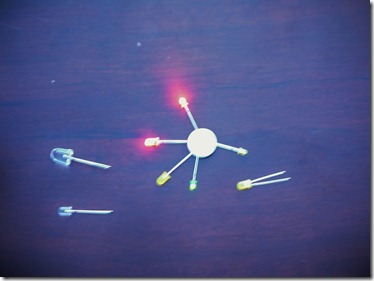 Now it doesn’t get any easier than this. The part of the battery with the writing is the positive side (hence the big plus sign on there), the other side is the negative. Simply slide the battery between the two leads (wires) on the LED. The longer lead goes on the positive side. If it doesn’t light up, just flip it around. And if you have two leads, put two on one side and two on the other. Your LED should light up and voila! you’ve created a simple circuit. If you want to keep your LEDs for a project, use some tape (preferably electrical) to keep everything together.

This is where the fun happens. You can play around with the LEDs – typically your battery will be able to handle several at once. Have kids guess what will happen if they keep adding LEDs. If you bought clear LEDs, let them guess what they’ll look like once they light up. You can pair up batteries (with positive touching negative) and use that to power more LEDs. Once you’re sold on the fun of circuits, here are some cool projects and experiments to try:

Bug thought this was VERY cool. LadyBug wasn’t quite as enthusiastic, but she still enjoyed it. We followed up our basic circuits project with a Make Your Own Remote Control Kit. The kids got to learn about resistors, capacitors, and transistors, and we ended up with a working remote control. Cool. This project is super inexpensive, but it’s mainly a starting point for other crafts and projects. If you want to make more projects, you’ll want to invest in a micro-switch so you can turn the LEDs on and off. You should be able to find one wherever you bought your components.

Looking for another idea for doing simple circuits for kids? Check out my review of Snap Circuits.

This project isn’t really great for little kids. Although they can do it, the batteries are extremely dangerous if swallowed.

How My Kids Taught Me to Love Reading Again

The Kids Are All Right – He Was Like a Father to Me
← Make: School’s Out Summer Fun Guide
The Week of the Toyota Prius Plug-in Hybrid–Sims Social Hint →

One Response to Simple Circuits with Kids