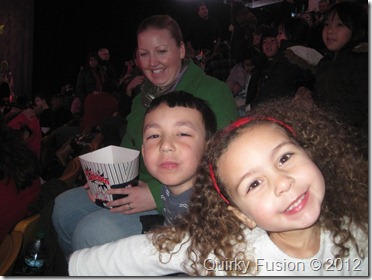 We first took the kids to Disney On Ice when Bug was three and Lady Bug was about two. We planned a wonderful day with the train, the show, and lunch out as a family. It was kind of a disaster, largely because Bug had serious sound-sensitivity issues. The next time, Bug was 5, LadyBug was three and we were sitting in box seats away from the chaos. We all had a wonderful evening. This time we saw Disney On Ice presents Treasure Trove. I enlisted my sister-in-law who loves Disney just as much as I do. It gave Big Guy some free time and a chance for the kids to hang out with their aunt.

I thought we left the house with plenty of time, but traffic getting into the parking garage was sloooow. By the time we got inside, picked up our tickets, and made our way to our seats, the opening music was starting. I zipped out to pick up food because there is no bigger disaster for LadyBug than to be underfed. Plus, she lives for popcorn. In all of the hurry, I dropped the ball as a mom. It was the day after a very busy Christmas. We didn’t arrive early enough for the kids to acclimate. I didn’t bring earplugs or a hat or anything for Bug. I had no idea where our seats would be and I simply didn’t prepare. And then I left right as the fanfare began.  By the time I got back, Bug was curled up in his aunt’s lap and tears were still streaming down his face. In the midst of my attempt to have a fun day with the kids, I managed a big parenting fail. 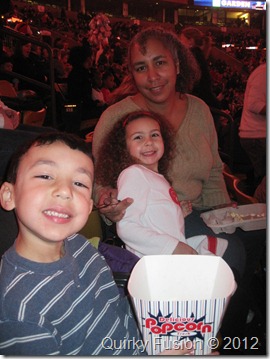 The show itself was wonderful, at least what I saw of it. It was a celebration of Disney animation from Snow White and the Seven Dwarves (or the “Seven Doors” according to Bug when he was younger) all the way to the 50th animated feature, Tangled. There were so many different characters… Peter Pan, the Tick-Tock Croc, Captain Hook, Smee, Tiana, Rapunzel, Flynn Rider, Simba, Nala, Scar, Rafiki, Jasmine, Aladdin, the Genie, Tinker Bell… and the list goes on. There was flying, stunts, humor, music, and plenty of magical surprises. LadyBug was captivated. She couldn’t take her eyes off the ice and the look on her face when Tinkerbell arrived was priceless. She would have stayed all day. If you have the chance to see this show, I highly recommend it. It was one of my favorites.

I’d like to say that Bug recovered, but that’s not really the case. He had dealt with a stomach bug the week before and his stomach was hurting him off and on throughout the holiday. He wasn’t really sick, but I think all of the excitement and anxiety and running around was keeping him from getting back to 100%. That, combined with the noise (or perhaps it was caused by the noise) really kept him from really enjoying himself. It’s too bad, because  I think he otherwise would have loved it.

We’ve been invited to Disney On Ice presents Dare to Dream over February break. I, of course, wouldn’t miss it. But this time, I’ll be armed with earplugs for my little guy who apparently hasn’t totally outgrown his sound sensitivity. Then again, I have threatened to bump him for one of his female cousins since he complained loudest over the princesses…

P.S. I’ll have a giveaway coming up for that very, very soon!

Disclosure: We received complimentary tickets to Disney On Ice Presents Treasure Trove for review purposes. There was no promise of a positive review and the opinions contained in this post are my own.

Introducing the Nemo Pool at Disney’s Art of Animation Resort

Give a Day, Get a Disney Day – Gone Too Soon
← Reflections and Resolutions
Dancinig Deer Delights →