When Disney Infinity: Marvel Super Heroes (2.0 Edition) came out, we were all excited to play as our favorite super hero. My son, who is nine, prefers Rocket Raccoon, while my daughter prefers Spiderman. I like Nova. But we were still anxious to add some traditional Disney magic to our collection. We didn’t have to wait long – today marks the launch of 8 new Disney Infinity 2.0 Edition characters – dubbed “Disney Originals” – and the new Disney Infinity: Toy Box Starter Pack (2.0 Edition)

for those who just really prefer Toy Box play over the Play Sets. 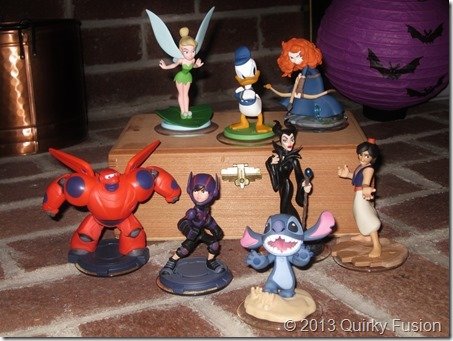 The new characters are as stunning as always. You’ve got familiars like Aladdin, Stitch, Maleficent, Merida, Tinker Bell, and Donald Duck, who throws objects like shoes and lamps instead of using a weapon. There is also Hiro and Bay Max from the new Disney movie Big Hero 6. Jasmine is due out in 2015. It’s wonderful to see some additional strong female characters added to the mix, especially a villain! Each of the Disney Originals have a signature “Special move” (new to the 2.0 Edition) that is unique and fun. Tink, for example, shrinks down to fairy size and pings off several enemies, pinball style, inflicting damage to each.

retail for $13.99 and work in the Toy Box mode of the Disney Infinity 2.0 Edition games.

This time around, Disney is offering a standalone Toy Box pack for those who prefer to build and design and don’t enjoy the Play Sets as much. It comes with the complete Disney Infinity software and the base, but no Marvel Super Heroes and no Play Sets. You can purchase these separately. Instead, you get Merida and Stitch, along with two special Toy Box Game discs: Stitch’s Tropical Rescue and Brave Forest Siege. These are similar in style to the Toy Box Game discs that come with the Marvel Super Heroes starter pack (tower defense and dungeon crawler, respectively), but are Disney-themed and appropriate for play with the Disney Originals characters.

There are also some new Power Discs that are themed for the Disney Orignals and look like a lot of fun. You can add terrain discs like Neverland or the Sands of Agrabah. You can ride on the Main Street Electrical Parade Float and throw confetti bombs at your enemies. You can even don Jack Skellington’s Sandy Claws costume with special scare bonuses.

retail for $4.99 and come with two discs per pack.

Disclosure: We received Disney Infinity 2.0 products to facilitate this review. There was no additional compensation provided and the opinions are my own. Affiliate links may be present in this post.