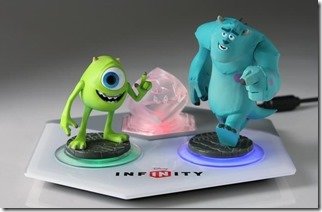 I first heard John Day, producer at Disney Interactive Studios, talk about Disney Infinity at the Disney Social Media Moms Conference last spring and what he said impressed me. It wasn’t just that the game looked like a lot of fun, or that I could eventually expect to play as some of my favorite characters from Disney movies.  It was that it captured a free-play experience, much like I had been praising in Toy Story 3, that allowed kids and adults to enjoy a pressure-free gaming experience. I believe that more people would play video games if they could learn to use a controller without worrying about their character dying, and if they could explore without time limits, attack situations, and other stressful situations common in gaming. Having since played the game, I know that it goes even further, allowing kids (and adults) to design and build.

I recently had the chance to ask John a few questions about Disney Infinity so I could share the philosophy of the game with my readers.

What’s Disney Infinity? (in a nutshell)

In Disney Infinity, players can place real-world toy versions of their favorite Disney characters onto a device called the Infinity Base and transport them into the virtual game worlds of Monsters University, the Incredibles, Cars, Pirates of the Caribbean and The Lone Ranger, as well as into a giant Toy Box. Disney Infinity is split into two major parts – Play Sets, and the Toy Box.  Play Sets are worlds that the player can visit to get more of the story behind some of their favorite characters. These are open worlds with lots of freedom about where to go and what to do, but they do have an over-arching story and missions to guide your actions.  The Toy Box is a virtual play space where the player can build any and every part of the world – the terrain, the buildings, even the sky is subject to the player’s control. Players can also use special toys, called creativitoys, to set up their own rules and gameplay for their worlds.

Can you explain your gaming philosophy around Disney Infinity?

Disney Infinity’s inspiration came from observing how kids play with toys.  When kids play on the bedroom floor, they take out a bunch of different toys from many different worlds, and use them all together to create their own games, and make up their own stories.  This seems to be a global constant, independent of any generation.  We remember doing exactly the same thing when we were kids.  This is what inspired Disney Infinity – the freedom to play with many toys any way you like, and instead of on a bedroom floor, it’s in our virtual Toy Box.

How did games like Toy Story 3 (Sandbox Mode) and Disney Universe impact the creation of Disney Infinity?

Do you anticipate releasing playsets for most/all of the major Disney films, or will you focus primarily on those that lend themselves to action gameplay?

We offer a variety of gameplay in Disney Infinity.  The three play sets included in the starter pack (Pirates of the Caribbean,  The Incredibles and Monsters University ) are all very diverse in how they feel and play.  I hope we get to do play sets for just about everything Disney, as I’m a huge fan.  We will definitely focus on delivering high quality Disney content to our fans moving forward.

Disclosure: We received a review copy of Disney Infinity. The image above is the property of Disney Interactive Studios.

2 Responses to What is Disney Infinity? An Interview with Producer John Day