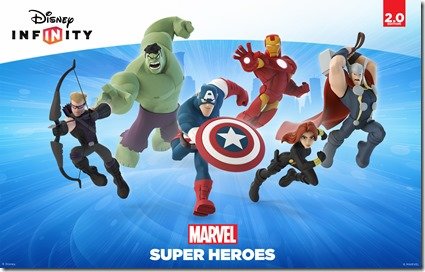 So I slacked off with the announcement of Disney Infinity: Marvel Super Heroes (2.0 Edition). Disney Infinity is the most played video game in our house, largely due to the creativity allowed in the Toy Box Mode. They love working together to create new worlds and experiences.

They new game will arrive in the Fall of 2014. It expands the Disney Infinity universe to include super heroes (and villains), so you can expect to see favorites like Captain America, Black Widow, Iron Man, the Hulk, and Thor. Original Disney Infinity characters and power discs will work in Toy Box mode. Saved Toy Boxes will still work in the new edition, and the Disney Infinity base is still compatible as well.

Here’s the announcement of Disney Infinity 2.0. It’s long, but if you’re a fan, it’s worth it. Skip to 31:30 if you just want to see/hear new features. I’ve also summarized them below.

Some of the highlights include:

They will continue to promote user-generated content (which will be even more robust with the new tools) and to provide their own additional (free content).

Today, Disney announced that Merida and Maleficent will be joining Disney Infinity 2.0 in the fall. They both look amazing and I’m thrilled the Disney has added in some fantastic female characters, since the Marvel characters are predominantly male.

Disney Infinity 2.0 will support PS4, XBOX ONE, as well as the PS3, XBOX 360, and Wii U. There will also continue to be PC and iOS integration.