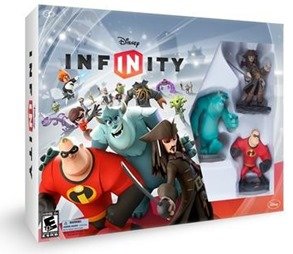 Disney Interactive sent me a review copy of Disney Infinity and I’ve spent the past few days playing through and watching my kids play through. The bottom line is that it can be a bit wonky, but is a lot of fun. This review is on the long side, so I’ve broken it up into the following sections: About Disney Infinity, Pros/Cons, What you should know before you buy, and The Bottom Line.

Disney Infinity looks, on the surface, a lot like Activision’s Skylanders game. There are physical figures that, when placed on the Disney Infinity base, bring the character to life in the game world. There are also special Power Discs that either add abilities to the characters (round discs) or bring new toys into Toy Box mode (hexagonal discs). That is where most of the similarities end, despite those who insist that one will win out over the other. Disney Infinity is a game about exploring, designing, building, and using your imagination. Sure, there are challenges and missions, but the focus is really on putting your own stamp on the game world. If you have played Toy Story 3 (which I highly recommend), Disney Infinity is like Toy Box mode on steroids. You can read a bit about the philosophy behind Disney Infinity in my interview with producer John Day.

Play Sets – Play sets are movie-themed areas filled with challenges (usually timed against a clock), things to unlock, missions (untimed), buildings to decorate, and familiar characters. The only characters you can use in a Play Set are those that are from the movie. Some of them have storylines to play through. Disney Infinity comes with three Play Sets: Monsters University, Pirates of the Caribbean, and The Incredibles.

Toy Box – Toy Box mode is where your imagination can run free. You can play with any of the characters and use the items you have unlocked in the Play Sets as well as plenty of other items. There are buildings, terrain, vehicles, weapons, townspeople (small unplayable characters who roam around), enemies, and more. There are also special toys called CreativiToys that can be chained together to create actions. The simplest is a trigger button that can cause something to happen when stepped on or off. There are more than 1,000 toys and they include a giant slingshot, a counter, fireworks cannons, an enemy generator, Cinderella’s castle, a stunt buggy, race track pieces, and an invisibility machine. There are even pinball parts so you can design your own pinball machine. You’ll find quite a few “toys” from Disney movies, but I won’t give away any surprises. You will find these items over time in Play Sets, by completing Adventures, and by earning the chance to randomly “spin” for toys. This takes some patience, but is also part of the fun. 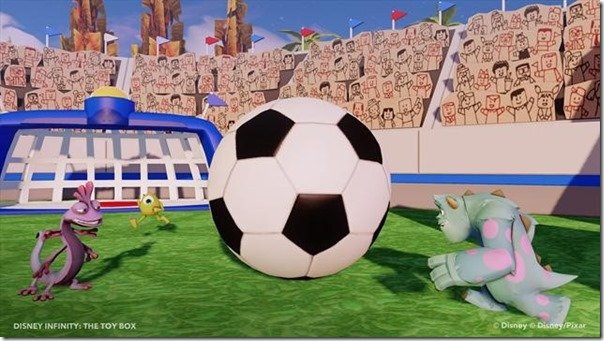 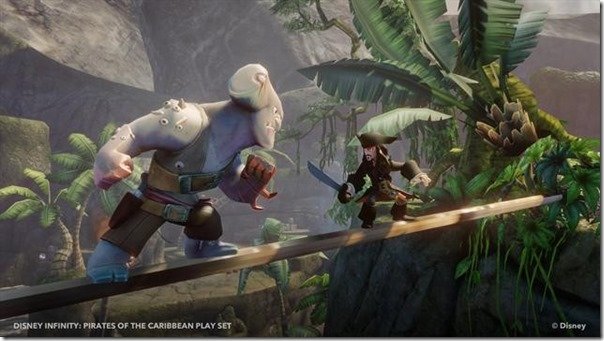 What you should know before you buy:

1. The Wii version does not allow multiplayer (online or off) in Play Set mode. You can build together in Toy Box mode, but this is a major drawback for those with younger/multiple kids, or those who enjoy playing as a family.

2. Play Sets only work with characters from those Play Sets so you cannot use multiplayer mode offline without additional purchases.

3. You can only play online with someone who has the same gaming console. For example, Xbox gamers cannot play with PlayStation 3 gamers online.

4. Characters level up as you play, but that level is attached to a user profile. If I have Mr. Incredible on level 5, and my daughter plays on her profile, she will either have him in “Guest mode” (points are accumulated, but never saved), or she can “claim” him in her own profile. That sets his level to 0 for her to build up on her own. When I “reclaim” him, I can continue from level 5. This allows family members to share characters while leveling them up on their own, but it can be a bit of a nuisance.

5. Two people can play as the same character if you have two figurines. They are clearly labeled onscreen as “1” and “2″.

6. Tutorials are available in-game via the pause menu. They are called “Master Adventures.” Not only do they teach you how to use some of the key parts of the editor and game, they offer some cool unlockables when you’re done. 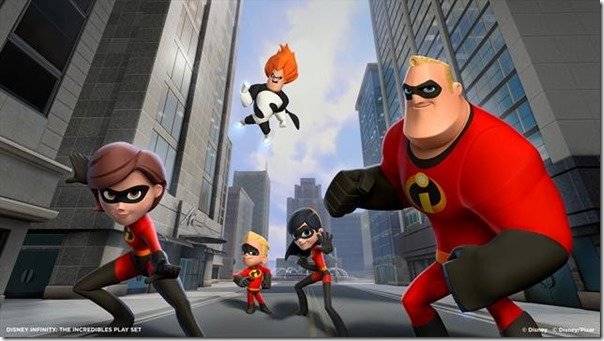 We have really been enjoying Disney Infinity as a family. My husband and I have spent time playing with the kids, individually, and together. The kids have spent hours and hours designing their own Toy Boxes. They love it! I’ve seen some negative reviews, but most of them seem to be missing the point (or they don’t understand the target audience). Are there some quirks? Yes. Are there things I would like to change? Sure, but who cares? The game is about imagination, creativity, and having fun together. It succeeds.

We have played both the Xbox 360 and PS3 versions of the game. The Xbox version had a noticeable stutter throughout, like the system was struggling to keep up with the game. It’s a minor irritation, but it’s there. If you have the hard drive space, you can install the game on the hard drive, which should improve performance. The PS3 version has a smoother game experience (although it occasionally stutters as well)and Big Guy and I both think the graphics are better. [*I am a member of the Playstation Family. It is uncompensated, but we do receive games and product for review. These opinions are my own.] I want to reiterate that the Wii version of the game does not have multiplayer Playsets (the Wii U has a different version). I would not recommend purchasing Disney Infinity for the Wii unless you have no other options because it’s simply a lot more fun to play with someone else. It also makes it easier to complete timed Challenges. We have not yet been able to try out online multi-player, but I will update if possible.

retails for $74.99 and includes the game, the Infinity Base, 3 characters (Sulley, Mr. Incredible, and Jack Sparrow), one random Power Disc, and a web code for registering your characters on the Disney Infinity website. It is available for PS3, Xbox, Wii, Wii U, and Nintendo 3DS (although I would not recommend purchasing for that platform). A PC version will be available later in the fall, as well as an iOS that will allow you to build Toy Boxes using your unlocked content and then play them on your console game. Additional characters

, which will work on any platform, come in 3-packs and individually. They cost roughly $10-$14. Power Disc Packs

So, buckle up for this ride. The game is addictive and fun, especially for those who aren’t hardcore gamers. Keep your eye our for sales on characters and Power Discs, because you’re going to want them all!

Disclosure: We received the game from Disney Interactive for review purposes. There was no additional compensation and the opinions contained in this post are my own.

One Response to A Family-Friendly Review of Disney Infinity