Last summer, LadyBug had a Butterfly Garden Party for her 6th birthday. I have been remiss in posting pictures, but that’s largely because I barely took any. I spent hours upon hours upon hours prepping for this party and then had no time to take pictures! So frustrating.

In any case, her 7th birthday party is nearly upon us and I just may be procrastinating from making THOSE invitations by posting about these. I am one of those people who gets crazy ideas in her head and won’t be dissuaded, even when it becomes clear that the idea may not have been the wisest choice. So, in this case, I decided that I wanted to make little crocheted butterfly hair clips for each invitation. I didn’t start with the idea to make clips, but then I fell in love with the sweetest little butterflies at Little Birdie Secrets and nothing else would do. 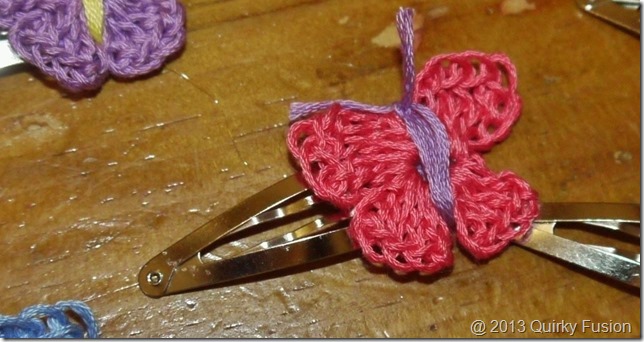 So stinkin’ cute that I couldn’t get them out of my head! Even when my first attempt failed miserably. And my second. And my third. Truth be told, I hadn’t done crochet in 20+ years and, well, I kind of sucked at following the directions. What is a forlorn mom to do in a situation like this? I called in my own mother, of course, who is far more talented than I when it comes to such things. She whipped up a few butterflies in no time flat. And kindly offered to make them all. But I am no slouch, so I declined. Once I knew that the pattern was fine and the error was on my end, I was determined to figure it out. Turns out that while my crocheting was, in fact, correct, I was doing them too tightly so they didn’t look like butterflies at all. Problem solved and a dozen or so butterflies later, I was ready for this: 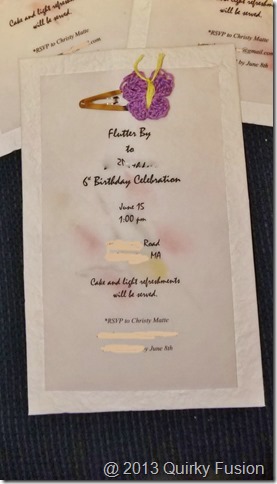 I bought these wedding invitations a year or so earlier on clearance at Staples. Pshaw to those who say you shouldn’t buy things without a project in mind or, worse, that you should throw things away when you’re not sure what you’ll do with them. They were simply perfect with a floral botanical print and ink jet-friendly vellum overlays. They already had holes in the top where you would normally thread a ribbon. Instead, I clipped the clips. One or two of the girls actually wore their clips to the party. So sweet!

The day of the party was absolutely insane. It was hotter and sunnier than expected and we were running around like crazy folks trying to get everything ready. There was simply a lot to do. Somehow we managed to get this little gazebo assembled in time (which reminds me that I should ask my husband if it’s possible to get it up for her next party – I’m sure THAT will go over well). It looked breezy, but also helped keep the sun and bugs off of the snacks. Yes, that is my butt in the gazebo. I didn’t know my picture was being taken. 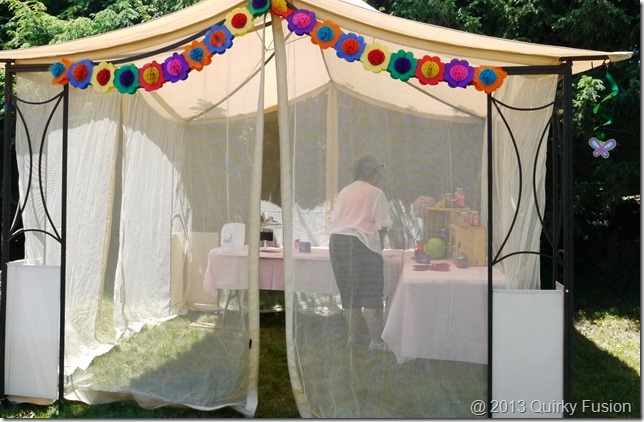 My mom, having been bitten by the butterfly bug, picked up some of these colorful butterflies for us to decorate with, so we placed them strategically (?!) around the yard. 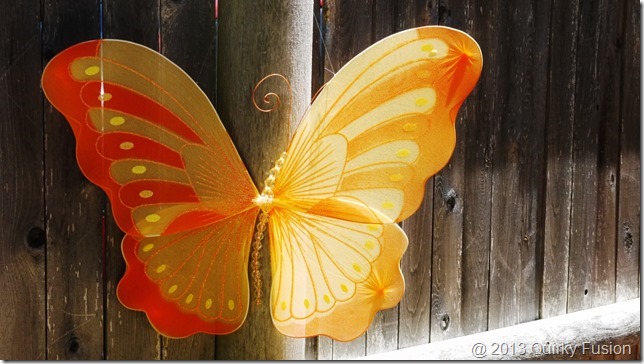 This is the table. We ended up placing a tent over it before anyone arrived, but this is just a sense of what it looked like. I wish I had some better shots overall. 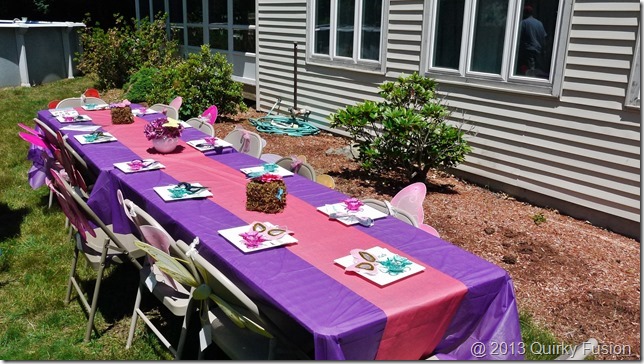 Each place setting had a butterfly mask, butterfly wings, and a glass candle holder with a butterfly bracelet kit. The centerpieces were just blocks of foam from the Dollar Store with moss (also from the Dollar Store) and some fabric flowers and butterflies tucked in. The one in the middle was a round white vase with fabric purple hydrangeas and another butterfly. I love that one so much! I’m looking for a spot in the new house to show it off. Anyway, they were all super easy and inexpensive to do. 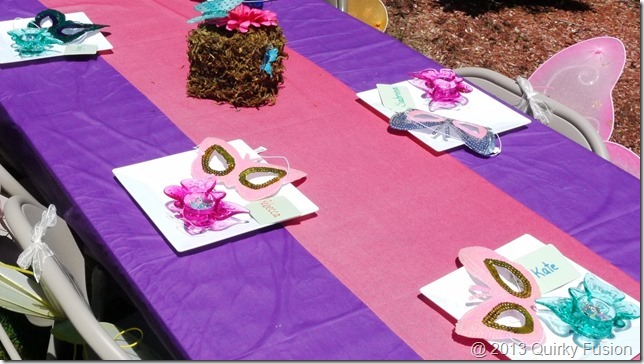 Each girl got her own butterfly wings, but that’s not all. Each set of wings came with a headband and a wand in matching colors. I couldn’t even believe it, but I bought 12 sets of these in one lot on eBay for $36. They acted as favors, along with the bracelets and, if parents wanted to take them home, the candle holders. I also got some super cheap cloth bags for girls to hold their stuff in.

When the guests arrived, the birthday girl (with some encouragement) told them that their matching headband and wand were hidden somewhere in the yard. They had a lot of fun hunting them down, but it’s not a big yard and we made it pretty easy. It was just an ice breaker. The pre-labeled wings and place settings helped minimize any drama over whose wings were whose or who wanted what color. We also chose carefully where the girls would sit based on LadyBug’s closest friends, and who knew who. At this age, there’s often a lot of clamoring over who sits next to the birthday child with the potential for hurt feelings. Assigned seats keeps that to a minimum.

One of my favorite parts of the day, and the place where I probably spent far too much money and time, was the candy bar. I love candy, but adults are always too well-behaved to make the most out of things like this. It was fun searching for candies with the brightest colors and mostly avoided chocolate because of the potential for hot days in June (and Bug’s food allergies). I also made my signature lollipop tree. We had something similar at our wedding for the kids’ table. The tree ended up being top-heavy, despite being weighed down with a whole jar of marbles, but I was so excited to find some yarn covered wire in pink and blue to wrap the stem with. It reminded me of a cross between Dr. Seuss and Willy Wonka. We DID have a bit of healthy fare as well – see the veggie tray?

The candy bar was actually off-limits until the very end of the party and it was so hard for the girls to wait. The idea was for each guest (parents included) to place some of their favorite candies in a small bag, and then clip the middle with a clothespin to make a candy butterfly. The sample was cute (see below) but most kids (and parents) filled their bag too much to really get the effect. I also had some sweet little birdcages that I decorated with more flowers and butterflies. It was such a great theme to work with. 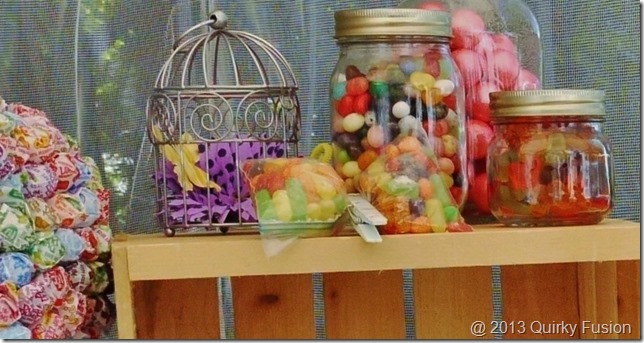 For drinks,  we had water and pink lemonade. I bought Newman’s Own Pink Lemonade and froze some tubs of ice to help keep it cool (and to water it down a bit, since it’s so very sweet). The girls felt so grown-up filling a cup with ice cubes and then pouring their own drinks. They even got straws with umbrellas on them. This had absolutely nothing to do with the theme, but who cares? They were fun! Also, my nieces came to help decorate and to run the glitter tattoo station, which was very, very popular. We’ll do that again this year. You can see the little butterfly tattoo on this guest’s arm. They are a step up from regular temporary tattoos and even I think they are pretty cool. 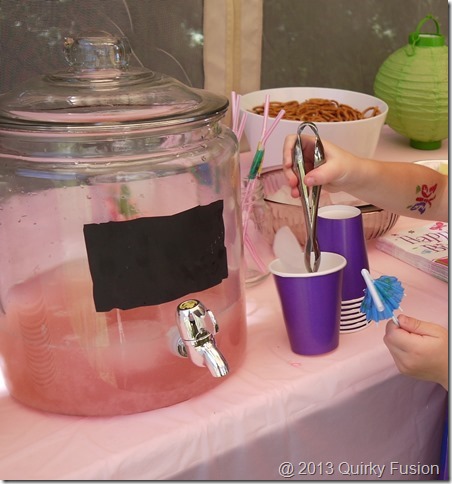 For cake I made chocolate butterfly bundt cakes. They are a giant pain to frost AND I wanted to use a combination of bright pink and purple, so I created my own technique for marbling them. Admittedly, they aren’t the most glam cakes out there, but they hold this gorgeous sheen even when dry and they allow some of the detail from the design to shine through. We provided the girls with gel frosting, sugars, and a few other decorations so they could decorate their own cakes. If I were to do it again, I’d have just decorated them myself. By that point, everyone was hot and sticky and just ready to eat the cakes already. I think they enjoyed the process, but I’m not sure it was worth buying a trillion little tubes of frosting! 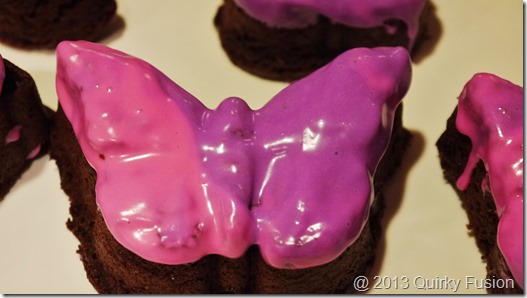 How Did It Go?

Overall, the party was a success. The kids had a lot of fun. The bracelet activity was a bit too challenging for many of them, and some opted out entirely, but I always like to make sure there’s something specific to do in case there’s a girl who feels shy or overwhelmed by all of the stuff going on. I like to please the active kids, as well as those who are more introspective. Heck, I prefer a party with something (optional) to do as well in case I get tired of the small talk!

So, now I can focus on this year’s party theme: Under the Sea. Another easy theme to work with, thankfully!

Under the Sea Party–Mermaids, Fish, Turtles, and More!

A Party, a Dress, Tapas and a Goddess Giving Birth

Decorating Skull Cakes for Halloween Parties
← A Tour of the New Boston LEGOLAND Discovery Center (with a Giveaway!)
Merida and Maleficent to Join Marvel Heroes in Disney Infinity 2.0 →