My original life dream was to be an Imagineer with Disney, working with audio-animatronics (the life-like robots you see in the parks). So, it should be no surprise that I fell in love with the whole line of HEXBUGs when I saw them at Toy Fair last year. The PR person wasn’t available and I took some literature, but I never quite managed to get in touch with them. And then I found them again at the MomSelect Swag Suite at BlogHer. I received a sample of the HEXBUG Nano, brought it home, and my whole family fell in love. Then, just as I was thinking about reaching out to see about further review opportunities, I was offered the chance to host a HEXBUG Nano party for TEN kids. Seriously?

After last year’s Zhu Zhu Pet party, my friends were bemused, but not entirely surprised, to be invited to a party involving “bugs.” Still, they had no idea what to expect. And so, when I invited 8 of our kids friends, their parents and their siblings to a last-minute cookout on Labor Day, I honestly expected half of them to decline. Nope. All but one family said yes. Suddenly our casual gathering of a few kids turned into a party of about 25 people. Yikes! Here’s the low-down on our bug-friendly party.

We received 30+ HEXBUG Nanos (3 for each guest, plus a few more), two battle bridges, a spiral ramp (you must get one of these when they’re available) and TONS of track and hexagons. You can get a sense from the final track we built, but we also sent each guest home with a hexagon and two pieces of curved track. Big Guy and I had a lot of fun building a big track with some help from Bug. 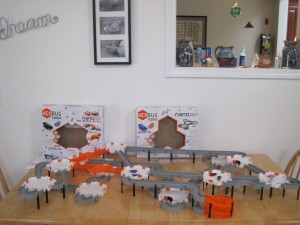 I put together a goodie bag for each of the “official” guests with the HEXBUG Nanos and track (and extra batteries!), some bug-theme fruit chews, a plastic bug and some glow bracelets. I did the tags with my Cricut Expression and the Pagoda cartridge. You can buy the bags in packs of 13 at Michael’s Crafts. I love how easy it is to create really cute tags and bags with the Cricut. These took no time at all. They aren’t quite as cute as the personalized tags from Bug’s last birthday party, but the bags can be re-used for a birthday or hospitality gift. I glued the tags and bags with an Elmer’s glue pen I’m testing out through BzzAgent. Next time, I probably would have opted for the Elmer’s tape runner, especially for the tags since the glue made the tags warp a tiny bit. I knew it would happen… that was sheet laziness! 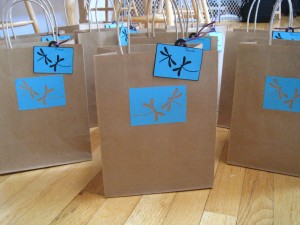 If you’ve been reading me for awhile, you know that I can be a bit over-the-top with food. Despite a lack of true skill in this area (and, no, I’m not being humble here), I just love cute baked goods. It’s a bit of an obsession as Big Guy will tell you if you ask about our cabinet with pans… or with cookie cutters… or with cake decorating supplies. This time, I had stumbled across Bakerella’s website and decided that cake pops were a must-have item at this party. Cake pops are cake that is crumbled, mixed with frosting, shaped into balls (or some other shape) and then dipped in candy or chocolate. Sounds fantastic, right? Yeah. These guys nearly stole the party from the HEXBUG Nanos. I had a big vision of making spider cake balls, but it turned out that it wasn’t quite as easy as it seemed. Since it was all I could do to keep them on their sticks while dipping them (even after “gluing” them on with more chocolate), I just went with a basic design. No one really cared because they were SO delicious. As a bonus, I was able to make a batch of gluten-free cake balls for a friend who couldn’t eat the regular cupcakes. Most people couldn’t tell the difference and I thought the gluten-free cake pops were actually better than the regular ones! Speaking of food stuff, I have never found candy melts that are nut-free. I used Hershey milk chocolate chips melted with a bit of vegetable oil. We made about 70 of these little guys. 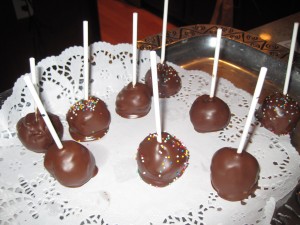 Bug and LadyBug were SO excited for this party. It’s all they talked about for a week. What a nice excuse for getting together so many great friends! The HEXBUG Nanos were a big hit. They’re sort of mesmerizing as they buzz around the track and it’s cool to watch them “negotiate” with each other over right of passage in small spaces. If they are flipped onto their backs, they flip themselves right back again. LadyBug kept getting frustrated that they weren’t doing what she wanted them to and I kept having to explain that they have “minds of their own.”

The HEXBUG Nano party was a HUGE success. There were a few kids who were disappointed to learn that they weren’t taking home a mega track, but I suspect HEXBUGs will end up on some gift lists this year…

I wonder what next year will hold?

Disclosure: I received the HEXBUG Nano party kit through my membership with MomSelect. The Elmer’s products were through my participation in BzzAgent. There were no promises of positive reviews and the opinions contained in this post are my own.