As big fans of HEXBUG Nanos, we were excited when HEXBUG Warriors were announced. We couldn’t wait to check them out. HEXBUG Warriors are small robots (although slightly larger than the Nanos) that have interchangeable weapons and armor. You place several in a “battle stadium” (or smaller arenas) and they fight it out for the top spot. Kids can swap out the weapons and armor to try to create the strongest Warrior possible. Warriors have a Training Mode so you can test everything out before switching the Match Mode and kicking off a battle. 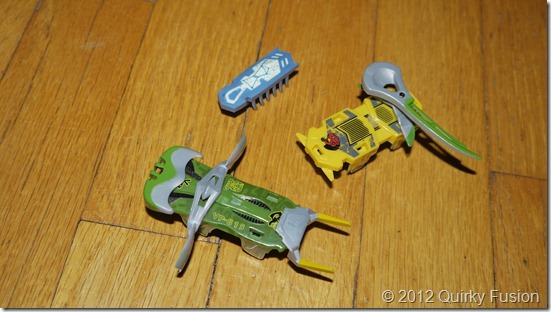 Bug gave me a hand with this review and created a video to show you how it works and what a battle looks like. As you can see in the video, the Warriors have lights on their back to show their health. Green is a healthy Warrior, while yellow shows that it has sustained some damage. When the light turns red, the Warrior is nearly out of health and the competition.

You can see that Bug is a big fan of the Warriors. As a parent, there are several things I like as well. The first is the backstory. Each color of warrior (red, yellow, blue and green) represents a different science academy and scientific research such as military technology, geothermal and clean energy, human cyborg robotic technology, and technology for the preservation of the Earth. The HEXBUG Warriors were built by the students at the academy for tournaments, just as kids today participate in robot battles at their schools. I appreciate that this is essentially a non-violent approach to fighting toys. The other aspect I like is the interchangeable pieces. Kids can make hypotheses about which weapons and armor pair well together to help their robot win. They can test the hypothesis, make changes, and try again. Hurray for the scientific method!

I will admit that I’m not as big a fan of the Warriors as I am of the Nanos. The battle stadium can grow to be fairly large, but the pieces still only fit together a certain way. There’s not a lot of room for creativity in that aspect. I also wish the Warriors worked with Nano track, although I understand why they don’t.

The Warriors are fun for small to large groups of kids to play with, and it does encourage some friendly rivalries. You can get started with two Warriors and a two-piece Arena for $19.99 MSRP, but I’d suggest going for the HEXBUG Warriors Battle Stadium. It includes a seven-piece Stadium and two Warriors. The larger set makes for more interesting play and leaves room for more Warriors to join in. That said, you can make your own battle area if you want a bit more space. Just try to make it round so none of the Warriors get stuck in a corner! HEXBUG Warriors use the same button cell batteries as the Nano, but the require two each. Stock up because these guys can go through a lot of batteries, especially if you’ve got a competitive child in the house!

Disclosure: We received several HEXBUG Warrior sets for review purposes. There was no promise of a positive review and the opinions in this post belong to the author(s).

LeapFrog LeapPad Review – Adults and Kids Agree!
← Memory House at the MRT–A Review
Join Me for a #STEMChat About Tweens and Engineering →