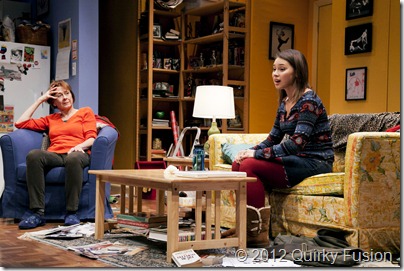 Imagine a house where your memories are stored. What would it look like? What would you find? Which rooms would hold which ghosts from your past? In Memory House from playwright Kathleen Tolan, teen Katia (played by Rebecca Blumhagen) grapples with a college essay about her own memory house , as well as her complex relationship with her mother, Maggie (played by Susan Pellegrino). Adopted from Russia as a child, Katia struggles to make sense of her own past, while looking toward her future.

It’s New Year’s Eve in New York City, and Katia’s college application needs to be postmarked in three hours. As Maggie arrives home with the intent of baking a pie, she finds Katia lurking around the house in a sullen mood and with an apparently incomplete essay. We immediately see the tension between mother and daughter, and learn that Katia’s parents are divorced. In fact, her accomplished and scholarly father is seeing a new, and younger, woman. Over the next 70 minutes, Katia and Maggie bicker and jab, push and pull, whine and cajole, and navigate the rocky waters of the mother and teen daughter relationship.

Tolan’s Memory House is a complex and multi-dimensional story. Through the journey, we face the realities of adoption, in particular of the cross-cultural variety, as Katia declares that she has been “ripped from a bleeding country” and wonders where she fits in. We see the challenges of parenting a teen as Maggie seeks the delicate balance of guiding, supporting, challenging, loving, and letting go. And, perhaps most importantly, we feel the conflict of a girl who is torn between growing up and entering the world on her own, and clinging to the familiar protection of her youth. 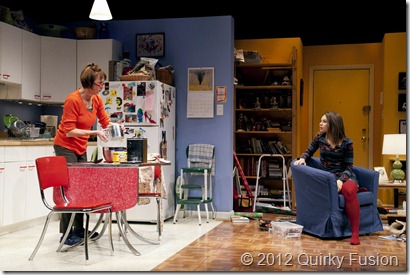 Rebecca Blumhagen as Katia delves deeply into the angsty, petulant, and wide-eyed-doe role of a teenager. Perhaps too deeply at times, as the intensity of her anger toward her mother makes her at times hard to relate to. With plenty of sighs and rolling eyes and huffing and puffing, we could use a few more vulnerable moments throughout to keep her sympathetic. Still, Blumhagen does bring plenty life and likeability to the character and we’re hoping by the end that she manages to get that essay in on time.

Susan Pellegrino is hilarious as a mom who must cope with her daughter’s ever-evolving moods with encouragement, force, coolness, anger, exasperation, and humor. Facing her own identity crisis as an ex-dancer, ex-wife, and soon-to-be empty nester, she pushes those concerns aside as she attempts to keep the peace with her daughter, all the while nudging her teen toward adulthood.

Maggie spends most the play baking her first blueberry pie. This isn’t all an act– she makes the dough, chills it, prepares the blueberries, rolls out the dough, assembles the pie, and pops it into a working oven to bake. And in the midst of all of the family drama (Katia’s father calls a few times to add his opinion, as well), there is something mesmerizing about the journey from raw ingredients to final product. You can’t help but make the connection to the molding and shaping parents do with their children before sending them out into the world. By the end, when we hear Katia’s college essay, it seems that both she and the pie are fully formed and ready to stand on their own.

Memory House is written by Kathleen Tolan and directed by Melia Bensussen. It runs for 70 minutes with no intermission. You can catch Memory House at the Merrimack Repertory Theatre through November 18.

This Is the Christmas that Never Ends…