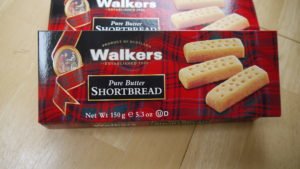 I can’t believe it’s spring. It’s wet and cold outside and the winter seemed to fly by. But here we are. By way of inspiration the folks at Walkers Shortbread sent me some of their shortbread fingers with the invitation to use them to talk about spring. My fellow Walkers Shortbread Society members had all sorts of creative ideas, from picnics to cheesecake to (my favorite!) Earth Day treats. I’ll admit that I was a bit stuck. I’ve only just recently posted my Chocolate Covered Shortbread and Dulce de Leche Bars, so I wasn’t looking for another dessert. And all that was coming to mind was grass and flowers. Cute, but also kind of a yawn, right? And then it hit me. An edible fairy house! I love little handmade fairy houses. I guess I’ve never lost that particular sense of wonder and magic. 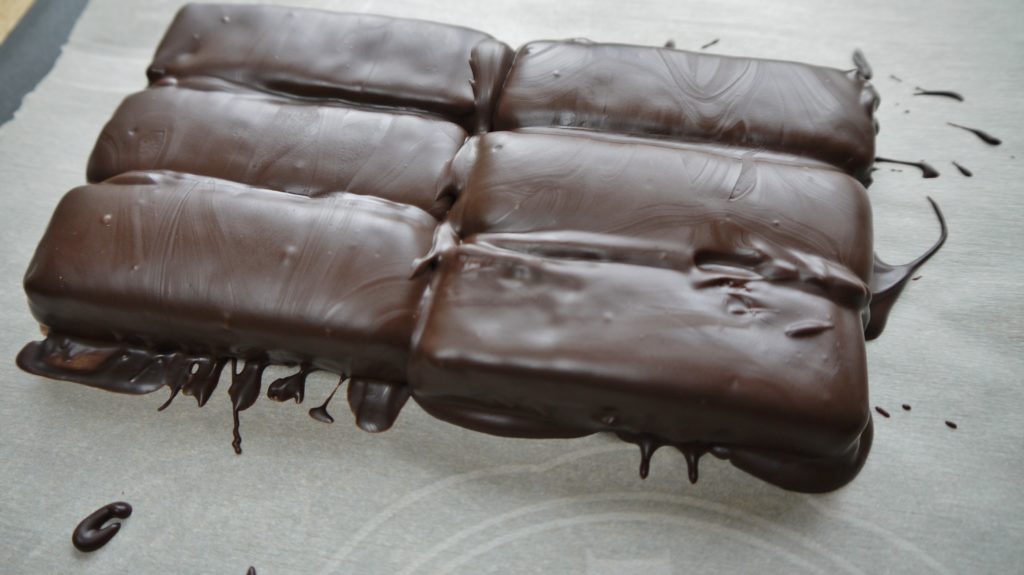 I used dark and green chocolate melts for color and “glue.” There’s nothing particularly difficult about this, but it is a bit time consuming. Build the walls on a piece of parchment by dipping each piece into the chocolate, scraping off some of the excess chocolate and putting each “brick” into place. Pop them into the fridge for a few moments to set and then cut off any extra chocolate drips so they fit together more securely. It doesn’t have to be perfect. Remember, you’re replicating natural elements like bark and leaves. Dip the edge of each wall piece in the chocolate and hold them together for a moment. The chocolate sets pretty quickly.

I used one 2×3 wall (shown above), two 1×3 walls, and two 0.5×3 walls (for the front doorway). You can make yours bigger or smaller. If you want it to be easier, skip the doorway. Just know that while it is somewhat of an engineering challenge, it does make it easier to move the house around while you’re working on it. 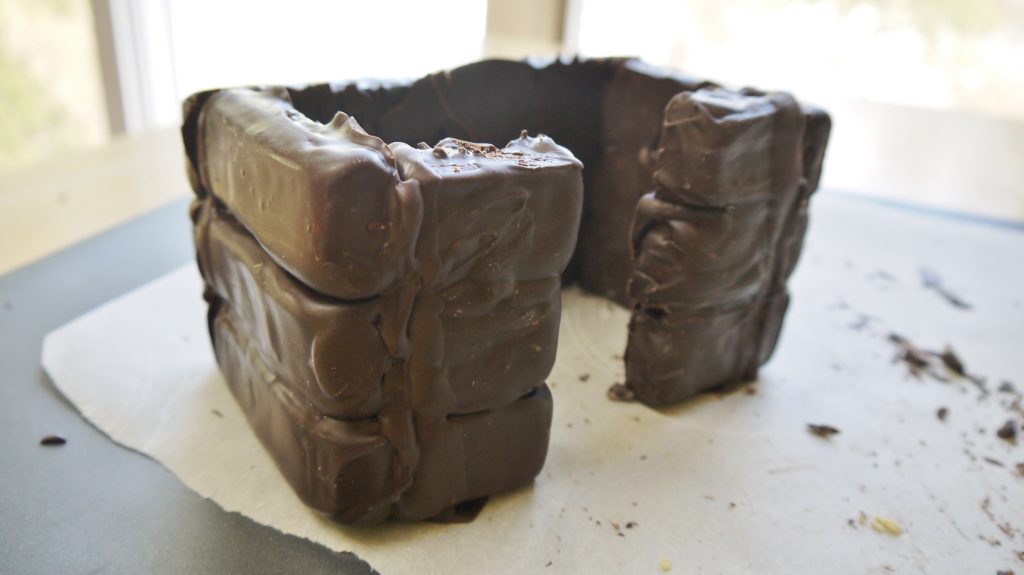 The roof was a bit trickier because I assembled it right on top of the walls. I used a toothpick across the doorway to help keep it stable will the chocolate hardened (see picture below). And I sprinkled green sanding sugar on top of each piece as I placed it to make it look like “moss.”

I’ll be honest here. It didn’t look like much assembled. The kids weren’t impressed. I wasn’t impressed. It felt like a fail. I didn’t even take a picture, so that was a double fail. Some days are like that.

This is where a bit of love and care makes a difference. I placed some of the melted green chocolate into a piping bag (seriously, I should own stock in these things) and snipped off just the very tip. And then I went crazy piping bushes and vines onto the house. I started by making the vines separately to attach, but that wasn’t working the way I wanted it to. Plus, it turns out that it’s not hard to pipe a vine right onto the house. As I went, I added some flower sprinkles here and there. I finished it off with some butterfly sprinkles on the roof. I could have kept going, but sometimes you need to know when enough is enough. Here’s an in-progress shot. 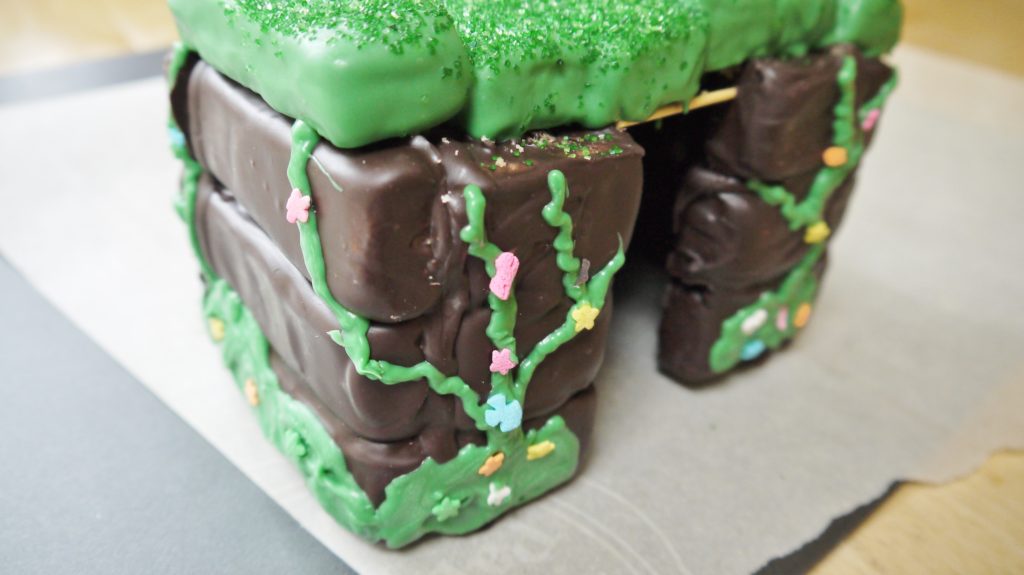 I wanted a cute fairy to pose with it so it would be obvious that it was a fairy house. And of course, I couldn’t find one in all of the kids’ stuff. That’s OK. This darling gnome does the trick. It could be a gnome house, too. Imagination, people. 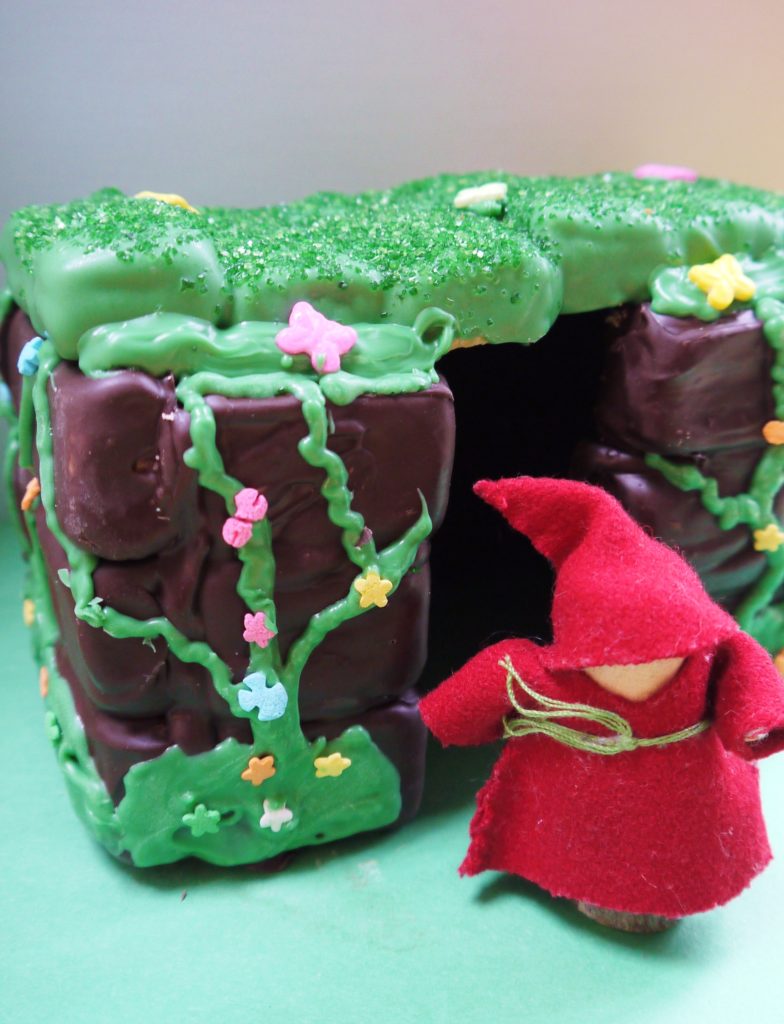 We had a family gathering this weekend and so I brought this along as a centerpiece for the kids’ table, although I replaced the gnome with some gingerbread people so it would be an entirely edible fairy house. These are the moments when my family gives me looks that appear to be a cross between thinking I’m Martha Stewart and thinking I’m insane. I assured them that this was a work project and therefore my insanity is justified. Whatever. They should be used to me by now. Anyway, the kids had fun tearing into the house, so it really was a multi-purpose project.

This isn’t a quick 5-minute affair, but it is versatile, especially if you swap out the colors. You could do an Easter Bunny house, or a leprechaun abode. My son thought it looked very Minecraft-like, so you could easily use it for a birthday party. How about a housewarming gift? It’s a nice alternative to gingerbread houses because the chocolate preserves the shortbread and you can eat it (as long as a million little hand haven’t touched it). So many fun options. What kind of house would you build?

Disclosure: We received free Walkers Shortbread and a gift for this post. All of the creativity and opinions are my own.

Spring Cleaning with the Swiffer SweeperVac

TogetherGreen Invites You to do Some Spring Greening

2 Responses to A Shortbread Fairy House for Spring