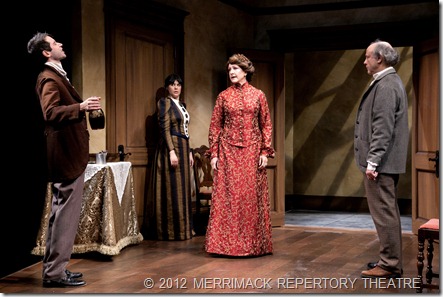 Take a dysfunctional family of actors, a neutral third party, three plays, two dressing rooms, and a convoluted script, and you have Half ‘n Half ‘n Half, the latest show at the Merrimack Repertory Theatre in Lowell. Written by John Kolvenback, the show centers on the family dynamics between a long-battling married couple and their daughter, all of whom are actors in a repertory theater.

If none of this sounds like it has the makings of a comedy, you’ll have to use your imagination. Half ‘n Half ‘n Half is a farce full of absurd moments and quick dialogue. You’ll have to pay attention to follow the interwoven plotlines, but you’ll be rewarded with plenty of belly laughs. And for those with a less developed funny bone, have no fear, there’s also a lot of family angst. Four families to be exact.

I particularly enjoyed Jim Ortlieb as the father/husband whose desperate cries for attention torture his estranged wife and daughter. Zoë Winters as Frances, the daughter, does a wonderful job of alternating between the love and exasperation many of us feel toward our parents. The whole cast is wonderful, but the interactions between these two hold true to the fraught, but often humorous relationships we share with family.

Disclosure: We received a media pass for review purposes. There was no promise of a positive review and the opinions in this post are my own.