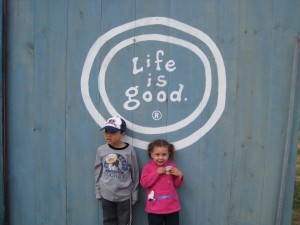 This past weekend, we packed up the kids, a stroller, and an absurd amount of stuff, and headed on over to the Life is Good Festival. I have been trying to convince my husband’s family to attend with us for a couple of years now, as they are walking advertisements for the company. But I’ve had no luck (for a variety of reasons), so this year we set out on our own. Or not really, because I tweeted about it and found several other Boston Parent Bloggers who were attending as well.

Tickets were on the pricey side at $55 per adult, plus parking, food, etc., but the lineup included The Laurie Berkner Band (an overall family favorite), They Might Be Giants, Guster and Jason Mraz (who Big Guy had never heard of!). It was for a good cause… and I also knew there would be tons of activities for the kids, so I was betting on a pretty good day. Assuming nothing bad happened, of course. The morning of, the weather was cool and gray, but not too bad, and everyone was in good spirits. That’s about the best I can hope for around here. We packed up into two cars since I REALLY wanted to see Jason Mraz and Big Guy REALLY didn’t want to hang around outside past 8 with the kids, especially for a guy he’d never heard of.

Arriving at the Route 128 Commuter Rail Station was a bit disconcerting. The pick-up/drop-off entrance was blocked and there was a sea of police officers, fire trucks, and other emergency crew… including a haz-mat truck. How’s that for building confidence? The line for the yellow school buses to take us to the site was 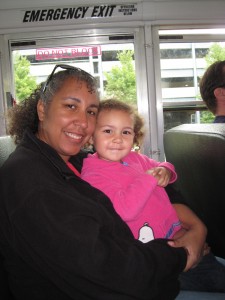 lonnnggg, but we were still fresh. The actual site of the festival had no available parking, and wasn’t within walking distance of any of the subway lines or trains. It was a bit of an odd destination since it meant that everyone needed to be bussed in from the remote parking lots. Or so I thought. As it turned out, the other parking lot was within easy walking distance. I wish they had been clear about that on the website, but it wasn’t the end of the world.

We waited in line a half an hour or so, which wasn’t too bad, and the kids were thrilled to ride to the festival in the yellow school buses. It’s just one of those great aspects of childhood. It didn’t hurt that they knew we were on our way to see Laurie Berkner. They didn’t really get the whole festival aspect, but they were pretty excited to see her. I, on the other hand, was a bit nervous. We had never done an outing that felt quite so ambitious (juggling 2 kids outside with port-a-potties and unknown food situations and loud noises and crowds and who knows what else) and I was concerned that Bug would be bothered by the noise and crowds. Or that they’d get cranky. Or that Big Guy would get cranky.

My fears were unfounded. We parked ourselves Under a Shady Tree (ahem) behind the kids’ music tent, where we could hear just fine without being overwhelmed by noise and crowd and such. And then the kids wanted to explore. There was an obstacle course that they wanted to try, but the line was always too long for my impatient husband. There was a ball toss, a giant parachute and tons of craft areas. The Life is Good team were giving out beach balls (provided you were willing to say an oath of fun and be bonked on the head with the ball first) and there were tons of free Pepperidge Farm Whole Wheat Goldfish. Yay, Pepperidge Farm! Mainly, though, the kids just wanted to run around and enjoy being outside with fun music and plenty of space. 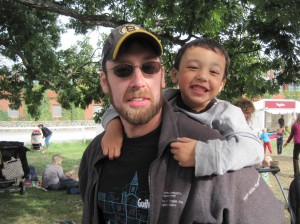 We hung out at the kids tent and even ventured in toward the end of  The Laurie Berkner Band, when the less hearty families had already gone home and there was plenty of space to move around. Turns out that they had filled the space with small plastic lawn chairs and big bean bag chairs and cushions (that weren’t bean bags at all, but yogibo bead-filled cushions). It was like a kiddie-lounge!

Once the kid-friendly music was over, we packed up our blanket and headed over to the main stage to catch Guster and Jason Mraz. It was getting close to dinner time, so Big Guy set out in search of food for the kids. Of course, everyone else had the same idea and the lines were looonnnnng. I felt bad, because he missed a good portion of Guster waiting in line and I know he was looking forward to hearing them. Even worse? He got to the front of the brick oven pizza line (literally 20-30 minutes) and found out the pizza wasn’t safe for Bug! Not sure why there would be peanuts/tree nuts anywhere near a handcrafted brick oven pizza, but you just never know. So he came back with food for himself and LadyBug and nothing for Bug to eat. I was expecting a royal melt-down, so I went out in search of the shortest line out there. It turned out to be a seafood booth that also carried corn dogs. Weird, but true. And the corn dogs were safe. So, Bug got to sample his first corn dogs and he thought they were pretty great! I ended up with a really yummy samosa and sweet potato fries from Samosaman, but my fries were ruined when the girls next to us decided to shake out their blanket in the middle of the crowd. Dirt and grass blew right onto my dinner. Sigh.

As Guster was winding down and we were wrapping up out dinner, it started getting dark and it start to rain a bit. It was mainly spitting, but it was enough that

everything started to get damp. The kids were worn out, so Big Guy bundled them up and headed for home. I stuck around to catch some of Jason Mraz. Unfortunately, there was at least an hour between the end of Guster and the start of Jason Mraz and I started getting Really Cold.  And everything was wet. I tried to find a dessert, but the food was selling out at that point, and the vendors who still had food also had lines that were longer than ever. I tried to cheer myself up with some glow bracelets, but by then, my mood was pretty low. I stuck it out and caught the first few songs of the set, but then I decided to call it a day. 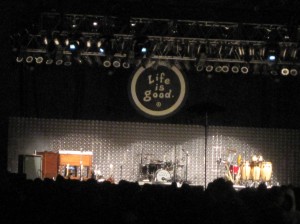 We got back to the Route 128 Station and dropped us off in the passenger drop-off zone. The fire trucks and hoopla were gone. Or so I thought. As we pulled in, I heard an alarm, but I tuned it out. Turns out that the fire alarm had just started going off and we weren’t allowed inside the building! I was feeling pretty lucky at the point, because we have a Fast Pass and so I could just head up an outside stairway and get in my car to go. Other unfortunate families had to wait until the building opened up so they could pay for their parking before heading out. There were a couple of cars trapped at the exit, actually, because they hadn’t realized they needed to pay before they left and other cars had pulled up behind them. What a mess!

It was a really fun day with the kids. I wish I had made it for more of Jason Mraz, but I had stopped enjoying myself at that point. I’ll have to catch him another time!

The Best Gift I Ever Gave?
← Can Someone Please Get Me a Coke? One Perfect Moment – Following Polly
The Great HEXBUG Nano Party →