I don’t think I’d be divulging any great secrets if I were to say that my son doesn’t really like scary things. He never has. But with a birthday at the end of October, it’s hard to avoid all things scary. Luckily, he’s getting older and I finally got the OK for a proper Halloween birthday party. And what would be a Halloween birthday party without some bloody skulls? I mean, really. It’s practically a requirement.

I love to bake, so I decided to make some individual skull cakes for each guest. Wilton makes a mini 3D skull cake pan that is so perfectly detailed that I immediately fell in love. The pan actually makes a 3D skull, allowing you to bake four fronts and four backs at a time. Assembled properly they look something like this: 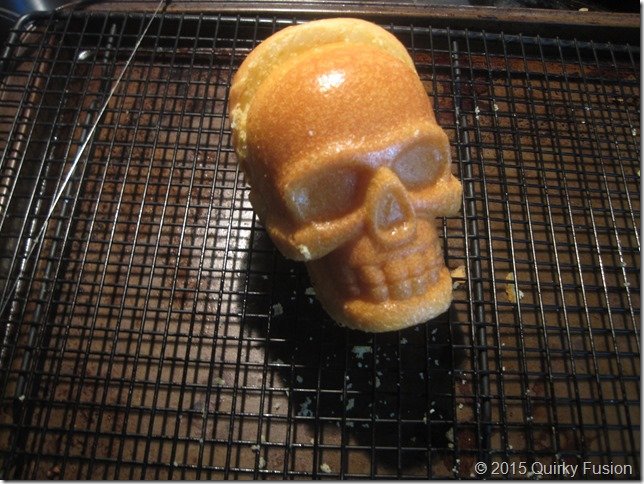 As cool as it is, that’s a whole skull is a lot of cake, especially for 9 year-old boys who are also having pizza, s’mores, and candy, so I opted to use only the front piece. I have a cake leveler that I used to remove the raised portion from the back of each of the cakes (just as with any cake, they rise to have a slight dome on the back). You can use a serrated knife as well. I did it while the cakes were still in the pan so they wouldn’t fall apart. Just let them cool first. 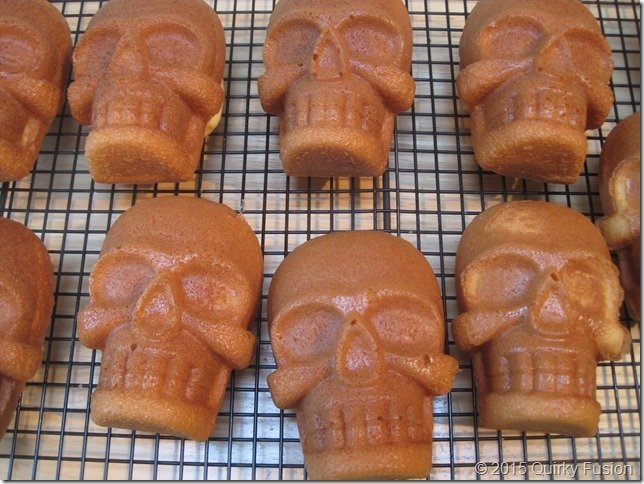 Detailed mold and bundt cakes are notoriously difficult to frost. It’s hard to retain the details with a layer of frosting. Some people use powdered sugar, but I use a trick I learned from one of my favorite cupcake books , Hello, Cupcake! by Karen Tack and Alan Richardson. If you melt canned frosting (yes, just do it!), you can make a glaze that goes on in a smooth layer and fits into all of the nooks and crannies. Just put the frosting into a microwave-safe bowl and microwave it for 30 seconds. Stir. If it’s still too thick, you can continue to microwave in roughly 5 second increments, stirring between. You want it to be thin enough to run off the spoon, but not so thin that it just melts into the cake. It’s an art, not a science! You may need to re-heat it part-way through the process of covering cakes if it starts to get too thick. 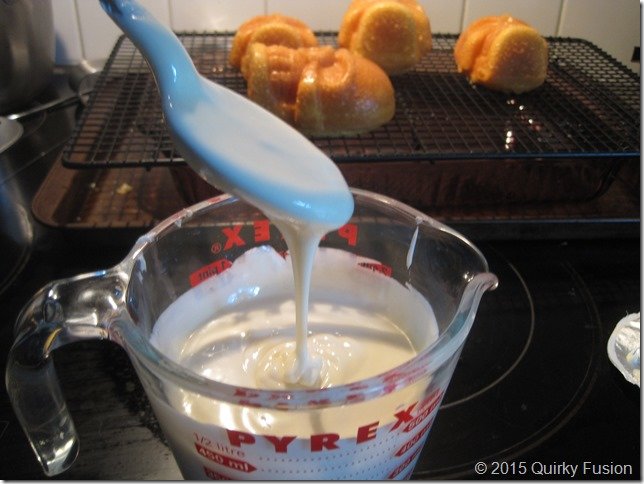 With cupcakes I would dip the tops in the melted frosting, but the skulls are too big for that. Instead, I put them on cooling racks over a pan and drizzled the frosting on top. I was able to scoop excess frosting from the pan to re-melt. You’ll see how pretty they looked below, but this first picture is an example of how you know when the frosting isn’t hot enough. It clumps up and doesn’t form a smooth layer. The other end of the spectrum is when the frosting is too hot/thin; it soaks into the cake and disappears. The frosting will be glossy when warm and then become more matte as it cools. 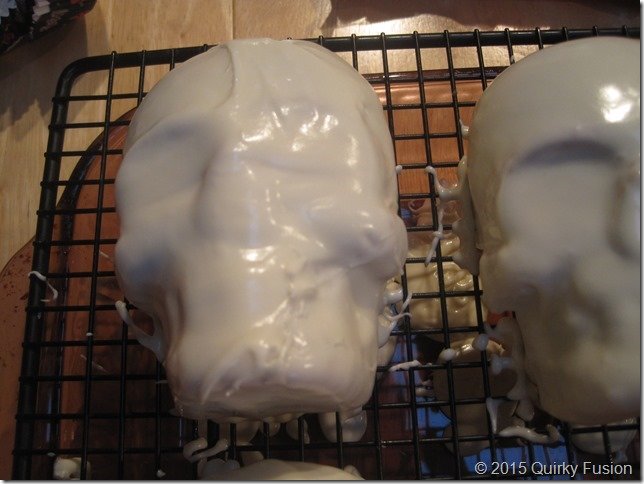 Now you can see how the frosting looks with a proper consistency and cooled. It’s just a nice all-over layer, ideal for someone who prefers cake to frosting, but enough for frosting fans, too. I added Wilton’s Candy Eyeballs with red veins. Creepy. And then Wilton Meat Cleavers made from Royal icing. If you’re decorating in advance, put the cleavers in at the last minute. Otherwise they’ll get soggy and fall apart. Top the cleaver off with a little red gel “blood.” 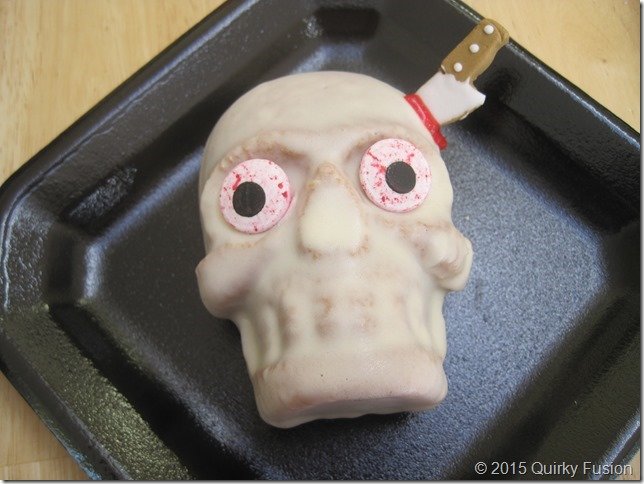 I thought these skull cakes were so much fun to work with! Even if you don’t want something gory or creepy, you can make a beautiful cake. This Mexican-inspired cake is decorated with chocolate covered sunflower seeds. I had been holding onto them for just the right moment and this was definitely it. 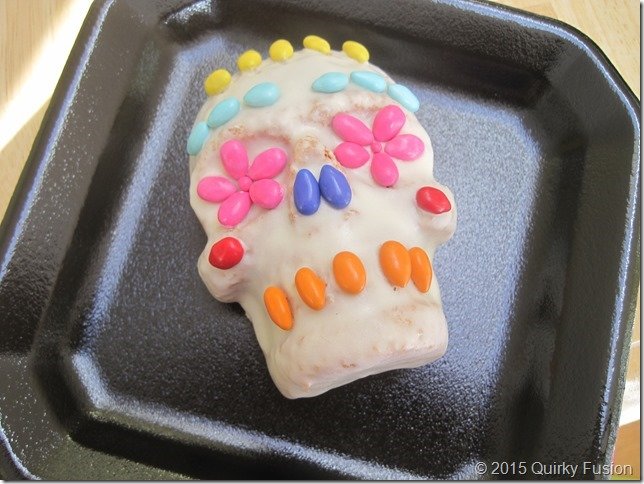 There are so many things you could do with the cakes. Cover them with fondant and you can make masks, faces, etc. I don’t know what kind of party we’ll be having this year, but I might have to find a way to work in some skulls… 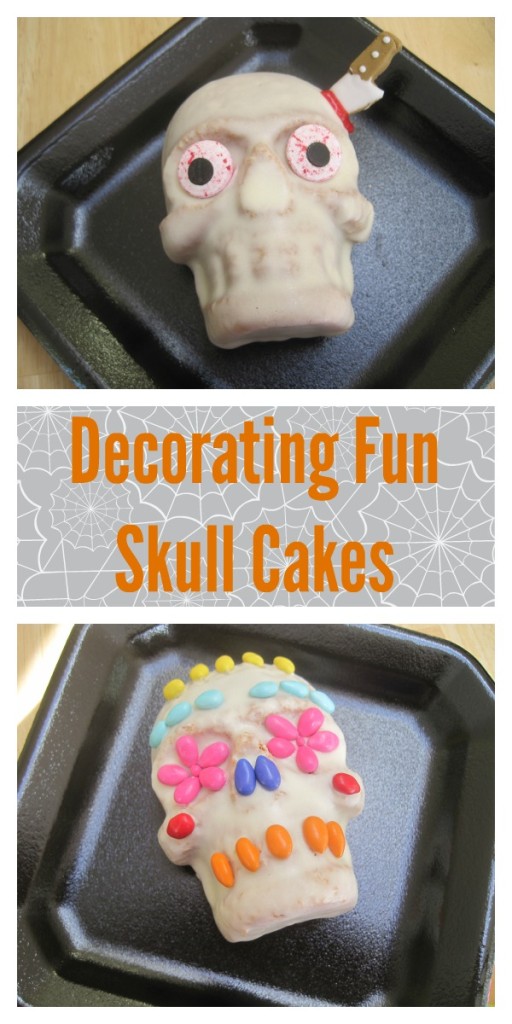 Disclosure: This post contains affiliate links. If you click on them, I’ll receive a small percentage of any purchases you make. It doesn’t cost you anything, but it helps us pay the bills.