When you’ve got a new house with an indoor pool and a daughter turning 7, all signs point to an “Under the Sea” themed birthday party. Sure, it’s a bit obvious, but it’s also got a lot of potential in terms of decorations and food.

Any good party starts with the invitations. Of course, I’m biased since I love working with paper so much, but an invitation sets the mood for the event to come. Unfortunately, I didn’t have a lot of time and I couldn’t find most of my craft supplies. They turned out pretty cute, despite  my limitations, and I was happy with them: 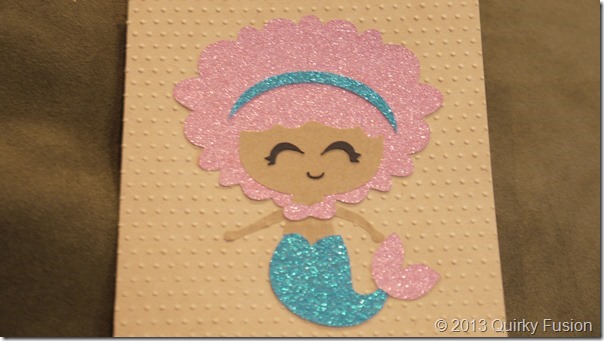 I got to use my Silhouette for the first time (partly because the cord for my Cricut was packed away somewhere other than the Cricut box). This little mermaid reminded me of LadyBug with her fabulous hair, so it was a perfect fit. She’s called “cute mermaid” in the Silhouette store and is designed by Jaime Koay. Inside, it just asked guests to, “Join us Under the Sea” for LadyBug’s 7th birthday party. I do have one tip… never rely on your 6 year old to make the guest list. She invited four girls from her new class and a handful from her old one. A few days later, she angrily accused me of not inviting three OTHER girls from her class. At this point, I told her she needed to invite all of the girls and she insisted that was the whole list. I made more invites and sent them in. Three days before her party, she came home and gave me one more name. She had forgotten one of the girls in her class. I felt awful, but it appears that first graders (at least these first graders) are pretty laid back about the whole thing. No hard feelings. The last little girl unfortunately just got a printed invite because I had no time (or supplies) to make another card so late in the game.

Next step in party planning is the supplies, of course. One of my favorite spots to shop for party supplies is Oriental Trading (no sponsorship here, just the truth of my shopping habits). I’ve been using them for as long as I can remember because they have a great assortment of products and their prices are reasonable. That said, it’s always a dangerous proposition for me to shop there because I inevitably buy things I had never planned on. In this case, it was a giant whale. He’s pretty cute, isn’t he? 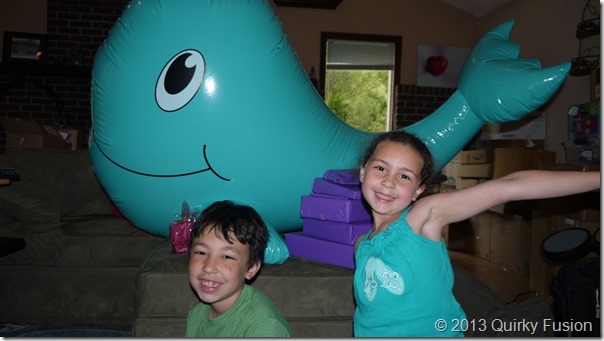 As I mentioned, the big plan for the party was for the kids to spend time in the pool. But, since I invited more than a dozen kids and the pool isn’t all that big, I wanted an alternative activity that would make leaving the pool worthwhile. As bizarre as it may sound, there was a news story about a bounce house flying 50 feet in the air with the kids inside. I’m sure there aren’t many people who would take this as inspiration to rent a bounce house for their kids, but well… I’m an odd duck that way. 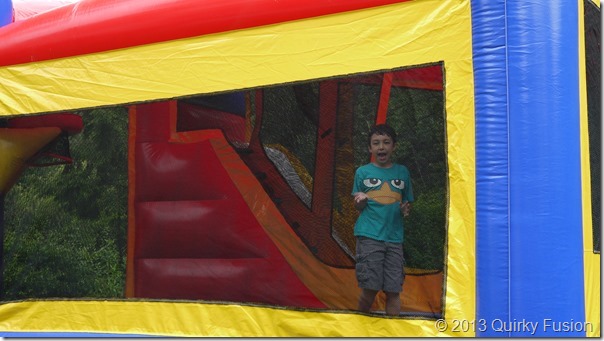 And of course, it wasn’t a small bounce house, either. It had a slide and a basketball hoop. I clearly have a problem. I do want to give a plug for the fantastic rental company (once again, not a sponsor, but great customer service). We used Twin Bros Party Rentals out of Chelmsford. I liked that their prices included everything (taxes, delivery, extension cord), and that we got the house for the whole weekend. In fact, they were kind enough to drop it off on Wednesday (rather than Thursday or Friday, which is their norm) AND work around our schedule so that LadyBug could get it on her actual birthday. They picked it up again Monday morning, so we had 5 days worth of bouncing. LadyBug LOVED it. So perfect for her! It arrived nice and clean and the delivery guys were very nice. The bounce house was a big hit and did indeed entice kids out of the pool when the time came.

Next step? The cake. Super important. I already had a vision for a mermaid cake when LadyBug declared that it had to be Ariel, sitting on a rock with sand. I ignored her vision and went with my own because 1) I can, 2) I had no supplies for an Ariel-specific cake, 3) I wanted to give her a cake of her own (which turned out to be a so-so idea, but whatever). We were both pretty happy with the results: 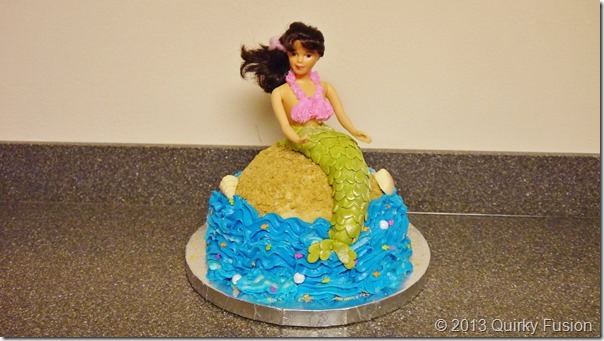 She’s not perfect, but she’s not Cake Wrecks-worthy. Now before anyone comments “OMG, I can’t believe you made that tail!” I will reiterate that it is not as hard as it looks. I started with a “log” of white fondant that I shaped like a tale. Then I used neon green fondant rolled with a bit of juniper green coloring to tone it down. And then I cut out little hearts and layered them on using a small paint brush and water. The whole thing is dusted with edible glitter. The tale took me about 20 minutes when all was said and done.

I also made about a million cupcakes. Chocolate stout with purple vanilla icing… 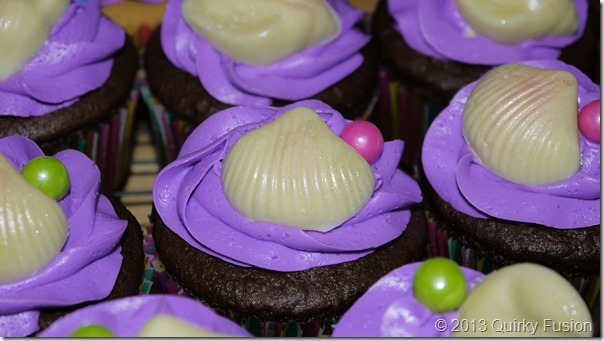 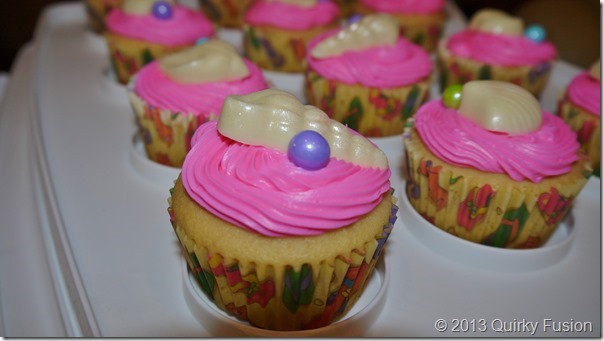 The “pearls” are Sixlets from Celebration by SweetWorks. They are candy coated chocolates and most of their varieties are nut-free (it seems to be impacted by packaging more than color. I got these at Walmart. The shells are white chocolate. I have a silicone shell mold (I have no idea why, but it came in handy!), so I molded them and dusted them with edible glitter in pink, gold, and pearl. I was inspired by some really gorgeous chocolate shells at Girl.Inspired. Edible glitter is your friend…

I also made a sweet (haha!) centerpiece with rock candy, sugar, and Swedish Fish. The glass vase is from Michaels. I had a grand vision of sticking the Swedish fish along the insides of the vase so they looked like they were swimming. I’m sure I could have figured it out, but my first two attempts ended with fish coated with sugar and hidden from view. You gotta know when to hold ‘em, know when to fold em’… 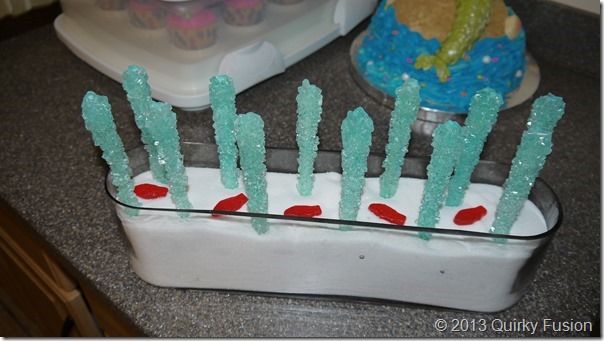 For drinks, we used Newman’s Own Pink Lemonade, which was a huge hit at the butterfly soiree last year. This year, apparently the girls have matured somewhat from pink lemonade, but most of them still enjoyed it. The rest were happy with water. I doubt anyone saw these but me and my niece, but I did make some fish-shaped pink lemonade ice cubes with an ice cube tray from Ikea. I also make a few larger “ice cubes” using plastic cups and pink lemonade. It helps keep the lemonade cold without getting watery. Guests can then add their own regular ice cubes (we had a bowl of ice sitting with the drinks). 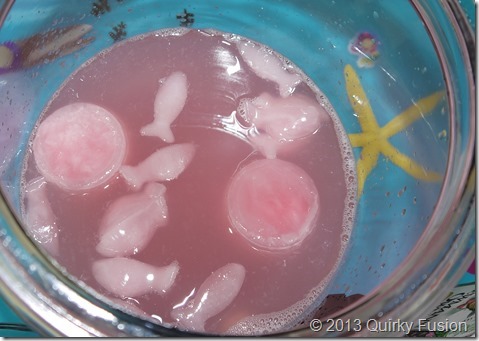 The table is mostly decked out in party  items from Oriental Trading. All of the paper goods are from there along with the mermaid confetti. The colorful starfish were a last minute find at Marshalls. I love how bright and fun they are, but the yellow one sitting on the drink table (see above) got wet and made quite a mess! 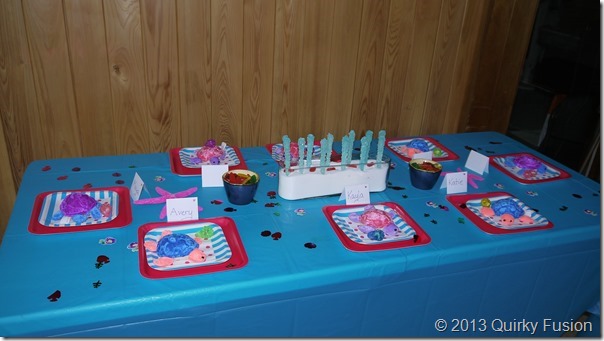 I also got small stuffed turtles and light up rings for party favors. Everyone loves those rings… I should have gotten some for the moms! I made place cards again. I was less concerned about fighting this year, but we had only one girl from LadyBug’s old school and I wanted to make sure they could sit together. LadyBug did the seating arrangement herself, though. 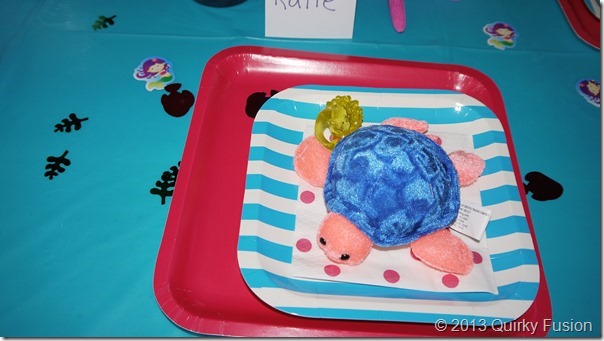 This is the beverage table with a fish skirt from Oriental Trading. I would normally put all of the food on here, but it was far too humid for cupcakes in the atrium. Instead, there was a bowl of Goldfish crackers that I’m pretty sure the adults enjoyed more than the kids. 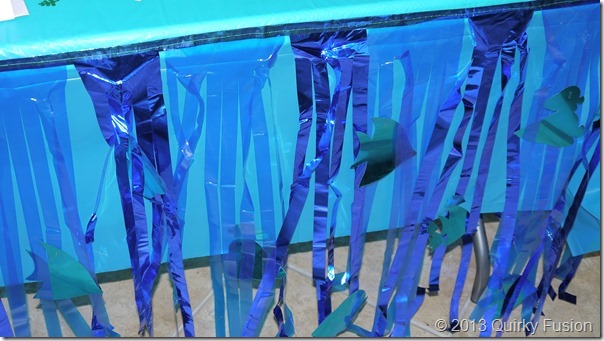 The gift table had a table cloth loaned to us by my good friend, Carrie, from Colorful Spark. If you’re looking for party inspiration, definitely head on over there. She’s a graphic designer, so she makes all of her own designs for invites, plates, water bottles, and more. I keep trying to convince her to PDF them and sell them on Etsy. I’m sure you’ll agree when you see her designs. 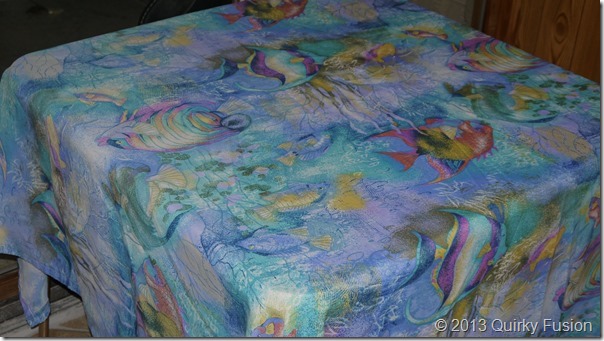 Carrie also loaned us some Under the Sea décor, but most of it didn’t quite match my vibe. I did use these great corrugated cardboard paper rolls with waves on them for the balcony in the atrium. Standing below, you definitely felt like you are “Under the Sea!” My nieces helped hang some honeycomb fish and balloons to complete the look. 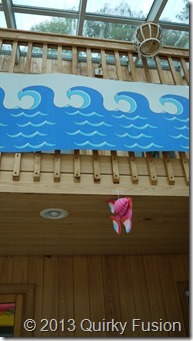 The kids always like to help, but when you’re a any kind of perfectionist, their help isn’t always helpful. I did find a good project for them, though. I cut out fish [Silhouette Store, fish rainbow by Snapdragon Snippets] using my Silhouette and had the kids glue them to tissue paper backing and then cut the whole thing out. These looked really pretty in the atrium windows with the sun shining in. Big Guy seemed disappointed when we took them down! 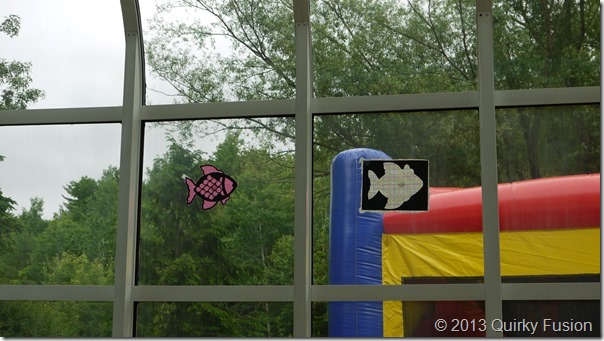 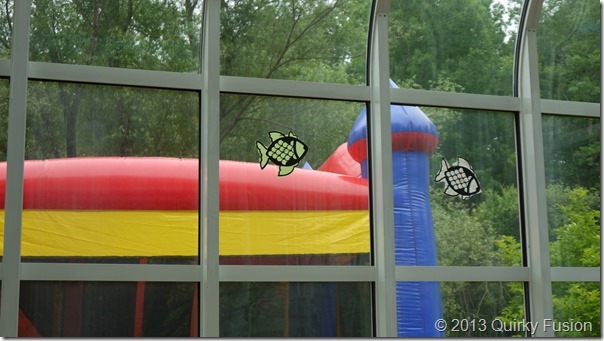 Here’s LadyBug getting hers. She chose a turtle. 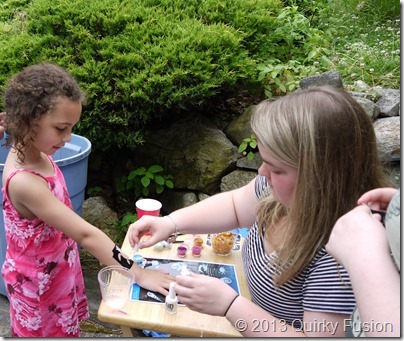 I didn’t get a picture of Lady Bug’s tattoo, but here’s a somewhat blurry shot of the same tattoo her friend got, only LadyBug’s was pink and purple. My niece has upgraded her skills and started doing striped designs. 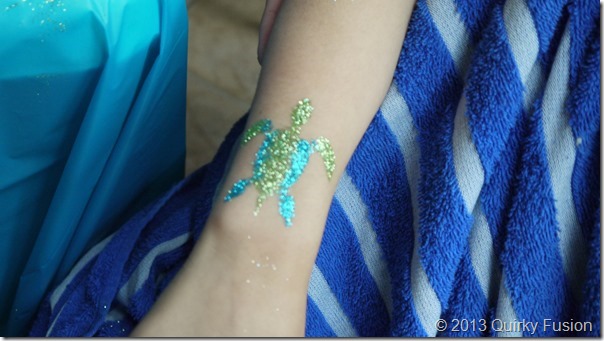 When the girls weren’t in the pool or the bounce house, they took over the new swing set. It took Big Guy and me (a whole lot of him, and just a lot of me) weeks to put this thing together! It’s a nice playset, with a spiral slide and two platforms, but boy did I wish we had hired someone to assemble it! 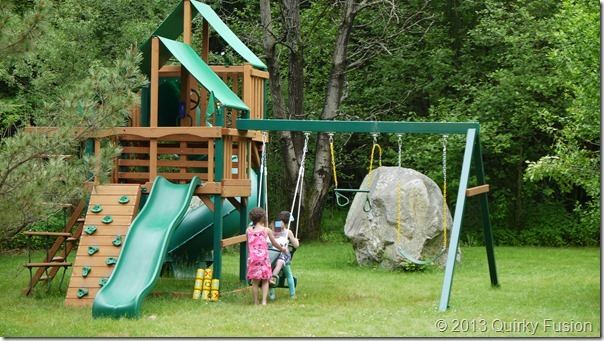 And here you go… one VERY happy birthday girl!

LadyBug has already decided that her theme next year will be Frozen. And there will be bounce house. We’ll see about all that since a year is a LONG time away. In the meantime, I’ll start looking for snowflake décor, just in case…

The 6th Birthday That Almost Wasn’t

2 Responses to Under the Sea Party–Mermaids, Fish, Turtles, and More!