It’s no secret that I have a spontaneous streak. Or that I have a certain sense of adventure. Or that I’m tenacious once I set my mind to something. Or that I’m a bit of a dreamer. It started when Lady Bug and I toured the Nutcracker Suite at The Ritz-Carlton, Boston Common. It’s a gorgeous hotel and the suite is elegant and playful. But other than noting the fancy bathrooms, what caught Lady Bug’s eye was this: 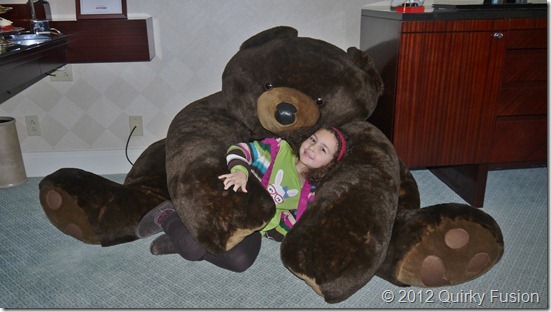 And when your daughter curls up like that and looks so absolutely adorable, what are you to do? Christmas was sneaking up and in the midst of medical issues and stress over a school shooting and thoughts of just how quickly things pass you by, a little seed of an idea snuck into my head. And grew. And grew. And GREW. Which is how I found myself on the Wednesday before Christmas with a sick kid at home, scrambling to find a giant bear. My friends on Facebook tried to help, but 1) local stores carry large bears, but not giant ones, and 2) the drop-shippers for giant bears all seem to be on the West Coast. I pretty much was losing hope when I stumbled across… 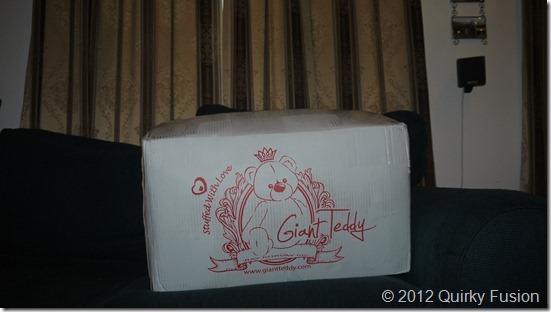 GiantTeddy.com. The problem? The bear needed to be shipped that day in order to arrive via 2-day air on Friday (the LAST CHANCE). The bigger problem? The order needed to be placed by 12pm PST and it was 1pm. Well, as you can see by the above picture, the team at GiantTeddy.com made it happen. They stuff, sew, and fluff each bear to order before shipping him or her out to a new home. I believe it was Elizabeth at Giant Teddy who not only expedited my order, but handled some billing gymnastics. And then called me later that evening to assure me that the bear had indeed shipped out 2-day air, not ground as my shipping notice stated.

In looking at the box above, you probably wouldn’t guess that it houses a 72″ bear. I caught the unboxing on video, though, so you can see for yourself.

Seriously, stop and watch the video before you scroll down. It’s fun watching him grow to full size! I wish I could visit Giant Teddy and watch them stuff the bears and then squeeze them into boxes!

Did you watch yet?

I’m just leaving some space for those who like a little suspense!

As it turns out, a 6 ft bear is a really, really big bear. I mean, I’m not a tiny person, but he dwarfs me. 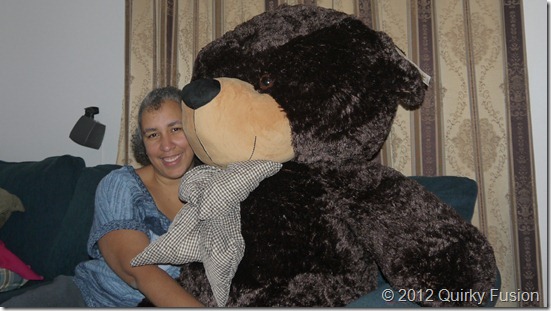 I might have all of my pictures taken with him – he makes me look thinner. His official Giant Teddy name is Brownie Cuddles. We’ll give him a special name of his own, though.

So there you have it. Our new family member: 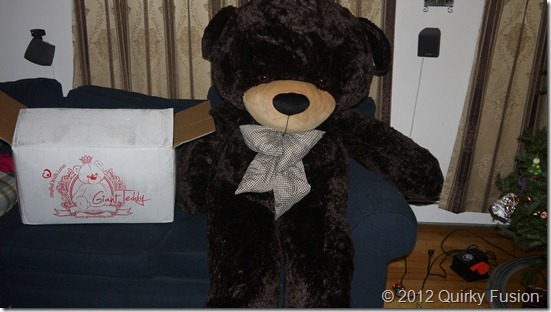 I still can’t believe he came out of that box. I’m very excited to see my kids’ reactions on Christmas morning. Too bad Big Guy wouldn’t let me video him. He had a pretty good reaction, too.

Disclosure: This is not a compensated post or a product review. GiantTeddy.com gets a nod from me for exceptional customer service and for making a Christmas wish come true.

Mom and Son Journey to NYC – Taking on the Big Apple, Quirky Style

A Twitterific Journey
← #26Acts of Kindness
A Tour of the Nutcracker Suite at The Ritz-Carlton, Boston Common →

13 Responses to Journey of a Giant Bear