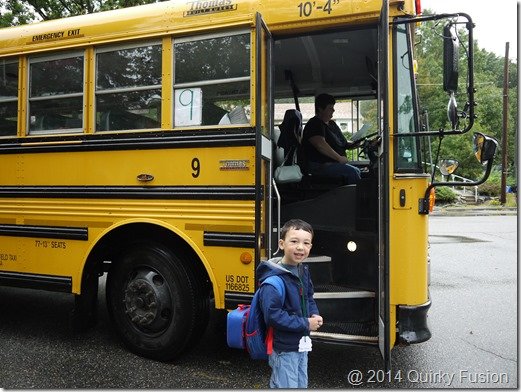 The first day of Kindergarten is nerve-wracking for most parents, but especially when you’re putting your little one onto a bus for the first time. Not only do you have to worry about whether they will make new friends, keep up with their work, and eat lunch every day, but you have to put them into the hands of a stranger to transport them around town. Honestly, the idea of trying to navigate a large vehicle full of small people, while also handling discipline issues, volume control, and the dramas of school-age kids, makes me fell a bit ill. When I was asked to share a store about someone other than a teacher who had a profound impact on my kids’ quality of education, I didn’t have to think very hard about it. Miss Laurie, our Kindergarten bus driver was (and is!) a rock star in terms of delivering happy kids safely to school each day.

I don’t have the most positive memories of the school bus growing up. The whole process had me terrified as a Kindergartner and when I returned to the world of school buses in the 5th grade, I had to contend with some on-board bullies. Even the moments that were positive to me as a kid make me shudder as a parent. What stands out most was the noise and chaos as my friends practiced their wrestling moves on each other by way of flips over the bus seats.  And so, I was extremely relieved that the Kindergartners had their own bus to get them to school. Chances are, flipping would be held to a minimum.

In our town at the time, Kindergartners were picked up and dropped off at their front doors. The older kids schlepped to bus stops, but the little ones had it easy. Shortly before school started, we even got a little card that told us his bus stop (our house) and bus number. So as the bus pulled up to the house that morning, we were warmly greeting by Miss Laurie, and Bug calmly stepped onto the bus. I knew he was nervous, but not nearly as much as I was! And because everyone else said they were doing it, I met the bus at school. It’s a silly tradition… to go through all of these (often tearful) goodbyes at your own home, only to suddenly appear at the school building as they disembarked… but I couldn’t resist catching the picture of my little guy stepping off the bus for his first day of Kindergarten. On the bus, Miss Laurie was giving little pep talks to each child as they got off the bus, wishing them a good day, helping to calm fears. I later learned that she had sung songs with them to help ease their nerves. 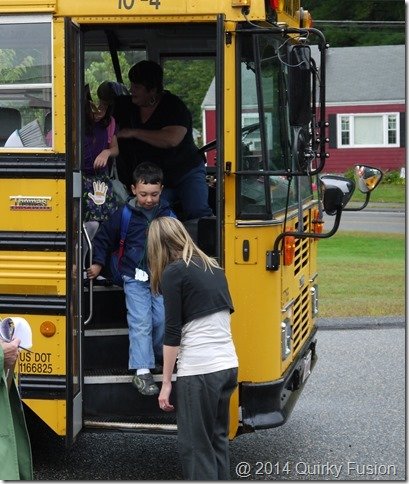 That first afternoon, I waited at our house for the bus to arrive. It was a bit late, but we had been told to expect that for the first few days. When it pulled up, I was surprised to see that Bug was the only child on board. Miss Laurie explained that bus drop off for the Kindergartners in our neighborhood had been moved to the end of the street (apparently without informing my family). Instead of returning Bug to the school, as is policy when there is no parent there for pick-up, she drove him right to our door. As angry as I was with the transportation office, I could have hugged her right then and there. She knew it would be traumatic for him to head back to school on his first day and went out of her way to  keep that from happening.

Over the next two years (one for Bug and one for LadyBug), we came to appreciate Miss Laurie more and more. She always greeted us warmly and knew the name of each of our kids. She chatted with them on the ride and would ask us about vacation plans and other things going on at home. For each holiday, she gave the kids small gifts… pencils, spider rings, note books, and such. She’d often send extras for the kids who had siblings at home. On the rare occasion she sent candy, she checked to make sure it was safe for Bug (he has nut allergies) and would mention it to me at the bus stop. We missed her sorely on her days off and even after my kids had moved on to the older grades, they would watch for Miss Laurie’s bus to go by so they could wave to her. And they weren’t the only ones. All of the neighborhood kids who had had her for their Kindergarten bus driver would smile and wave excitedly. If I’m being honest, one of the sad things that crossed my mind when we moved out of that town was that the kids wouldn’t have Miss Laurie again in the older grades.

There are a lot of people beyond teachers who work together to help our kids have the best educational experiences possible. In addition to bus drivers, there are custodians, classroom aides, food services staff, secretaries, security guards, and others. I think sometimes it’s easy to overlook their contributions, but in honor of American Education Week and specifically Educational Support Professionals Day (November 19), it’s a good time to remember how essential they are and maybe thank them if you see them in the school hallways. We always tried to let Miss Laurie know just how much we appreciated her and I believe that even a small amount of gratitude can go a long way.

For more information on ways to support your kids as they transition into Kindergarten, face bullies, and deal with other school-related challenges, you can visit the National Education Association’s (NEA) Parent page.

Disclosure: This post is part of a compensated program with the National Education Association’s Raise Your Hand for Student Success campaign. All opinions and affection for Miss Laurie are my own.

Grab the Goodies to Educate About Underage Alcohol Consumption (Review)