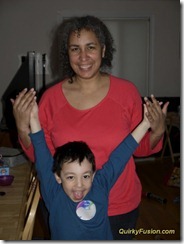 I’m biracial. I love being biracial. I love dancing in different worlds, being unique, leaving strangers wondering. I’m entertained by the many ways people try to ascertain my racial makeup, some with rude frankness and others with a subtlety so profound that I’m not even sure what they’re asking. It wasn’t always this way. There was a time – many times – when I was unhappy with my background and the color of my skin.

My biological father, who was black, was barely in my life. I grew up with my white mother and, when she remarried, an entire white family. It was a white neighborhood (and no, not predominantly white… just white) and school, and I clearly stood out. It made me self-conscious. It made me different. And it made me really uncomfortable.

It took me a long time to grow comfortable with and then proud of my own skin (literally). It took ages for me to get past a feeling of not being black – or white – enough. Whether you realize it or not, people place expectations on you the moment they see you. Being bi-racial means a broader set of expectations because people aren’t quite sure what box to place you in. Do I speak Spanish? (Nope) Am I a great dancer? ( Hardly) Do I come from some fabulously exotic location? (Absolutely not) You can safely assume that whatever you expect from me upon seeing me is not what I’m going to deliver. I’m not going to speak, act, believe, or dream in whatever manner you’d expect. It’s one of my super powers. And now, instead of feeling less because I don’t fall into some norm, I revel in it. My site isn’t called Quirky Fusion for nothing.

And now I have kids. Since my husband is also white, my kids aren’t sporting much of my color. I am sometimes a bit saddened by this because I don’t want them growing up forgetting part of their heritage. It’s important to me and a source of pride. On the other hand, I’ve assumed that perhaps they’ll find their lives to be a bit easier without a question mark over their heads. I was wrong.

What I didn’t realize was that quite a bit of my angst growing up was less about being biracial and more about the idea that I didn’t “look like” my mom. In reality, I looked just like my mom if you can get past the color of our skin, but I didn’t see that. I just felt different from the person who mattered to me most.

Bug, who is five, is starting to notice things like this and has become a bit obsessed. He doesn’t seem to notice or care that his skin is a shade or two darker than his dad’s. What he notices, and has become quite concerned with, is that his skin is much lighter than mine. When I comment on his tan, he anxiously asks if he’s going to be as brown as me. He holds his arm up to mine and drops it in disappointment when the coloring still doesn’t match. When he’s tired and frustrated, he insists that he doesn’t fit in our family. And I know that the color of our skin is partly behind his feeling.

I explain to him that we’re all different; each one of us is a different shade in the spectrum of our family. No one of us has the same coloring as another. I tell him that he completes our family and we couldn’t be happy without him there. But behind it all, my heart is breaking for my sensitive little guy.

9 Responses to Parenting Challenges: Race, Color, Identity and the Need to Belong