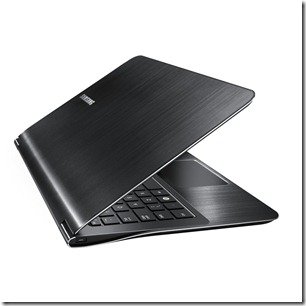 Lightweight and thin laptop computers are all the rage, but no one wants to sacrifice performance for portability. I actually have a netbook that I bought for travel, but find it so frustrating to work on that I still prefer to lug along my heavier machine. The Samsung 9 Series is designed to remove the compromise and provide a light machine that can still get the job done. The specs in this review refer to the 13.3-inch model. There is a model with an 11.6-inch screen as well.

I will be honest here, I fell for the Samsung 9 Series before I knew anything about its specs. Its sleek, yet curvy design had me at hello. But the 9 Series isn’t simply a good-looking machine. At 2.89 lbs, the laptop is covered in Duralumin which is apparently used in aircraft design. This makes it a great choice for road warriors who need a sturdy laptop to bring along for the ride. At a mere 0.64-inches thick, it easily slips into your carry-on luggage or tote.

The Samsung 9 Series has an Intel CoreTM i5 processor and 4GB RAM which is plenty of computing power for most regular home and business tasks. I was also happy to be back on Windows 7, which my netbook really can’t handle. Other than the size and durability, my two favorite things about the Series 9 are the battery life (up to 7 hours) and the Solid State Drive (128GB). If you’re not familiar with SSDs, one of the perks is that they reduce the amount of time for your computer to boot, making a resume from sleep mode super-speedy. Have you ever been about to leave the house and realized you forgot to get an address, check the weather, look up directions or print a coupon? No more waiting for an eternity for your machine to boot.

If you’re a visual person, you’ll probably be glad to know that the 9 Series has a gorgeous HD LED-backlit screen. Why do you care? Because when you’re sitting in the soccer field, the ball game, the beach, or wherever else in the bright sunlight, you want a screen that will still allow you to see the stats, jot down a shopping list, catch up on email, or whatever else you’re into. The keyboard is also backlit. I don’t know what you’re doing hanging out in the dark, but at least you’ll be able to see the keys.

The one thing I didn’t love about the Samsung 9 Series was the touch pad. The fact is that I simply don’t like touch pads – mine is disabled on the laptop I use daily – but this one blended a bit too seamlessly into the case. It also has integrated buttons so the touchpad just looked like a big blank space. The buttons were fine, but I was forever jumping to weird places on the screen. They are particularly nasty for little kids, so that’s something to keep in mind for family machines.

It shouldn’t be surprising that a laptop this nice is going to come with a corresponding price tag. While it’s certainly worth it, the Samsung 9 Series will easily cost you $1200+. This is comparable to a MacBook Air, which has a similar set of specs, providing a good option for those who prefer Windows-based machines.

Disclosure: We received a Samsung 9 Series PC on loan from Microsoft for the purpose of this review. There was no compensation. There was no promise of a positive review and the opinions contained in this post are my own. Image courtesy of Samsung.

Join Us for a Techlicious Tea-Intel Ultrabook Twitter Party

Join Us for a Techlicious Tea-Intel Ultrabook Twitter Party