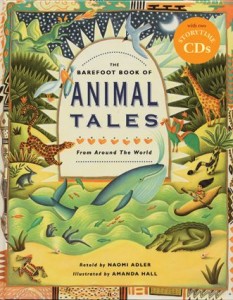 Bug is four. His toys are important to him, as is his fish, a good dessert and time to play video games. He’s a smart, sensitive little boy, but he’s four. You can really only expect so much.

As I mentioned in a previous post, I’m trying to raise my kids with an ethic of service. This past holiday season, I spoke with Bug about the possibility of donating some old toys so that they could be given to kids who didn’t have any. He was reluctant at first, but when I asked him to think about how sad he would be if he had no toys, he came around. It didn’t hurt that Christmas was around the corner and he had already crafted an ever-growing wish list for Santa. Although we didn’t quite rally the time to sort through their mound of toys during the holiday (aka SICK) season, I was hoping that the idea had taken root in his mind.

Just the other day, I was reading “The Rabbit in the Moon,” a short story from The Barefoot Books of Animal Tales From Around The World, to the kids at bedtime. The story is from India and is actually a bit gruesome for young children. In it, the Rabbit is such a generous being that he offers to throw himself into a fire in order to feed a hungry beggar (actually a spirit in disguise). Just as I was regretting choosing this particular tale, I came to the last line, “remember that if you give something precious away, you may receive something back that is very special.”

As soon as Bug heard it, he turned to me and said, “I think I’m going to give away some of my old toys.” I asked who he’d give them to and he replied, “I’d give them to kids who don’t have very many toys. Maybe I’ll give them to M & K [his cousins].” I did explain that his cousins were fine for toys (besides the fact that they’re quite a bit older than he is), but that I thought it was a very nice idea for us to share some of the extra toys in our home with someone else.

Now, Bug obviously had a bit of an ulterior motive, and his understanding that he might “receive something back that is very special” was most likely more material than spiritual. Still, the original conversation stuck with him and he understood at least the basic concept of generosity. Heck, I’m chalking this one up for a major win. Now I just have to work on LadyBug. She’s a tougher nut to crack, although she’s usually quick to share a snack with Mom or Dad…

Do you have ways you encourage your kids to be generous?

The Girl with the Curl–Good Kids with Challenging Behaviors

How My Kids Taught Me to Love Reading Again

35 Fun Things To Do With Kids When You Lose Power

One Response to Teaching Kids to Be Generous