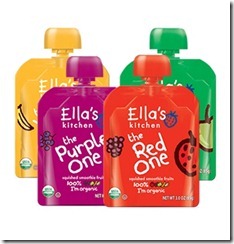 I’ve been hearing about Ella’s Kitchen for awhile now. They make organic baby food/fruit pouches that are easy to take on the go. Since my kids are well beyond baby food, however, I haven’t been paying too much attention. Until they sent me a box of samples, that is. And then I figured that I might as well pull out the ones that are fruity (as opposed to the apple/spinach/rutabaga combo) and see what the kids thought.

I happened to have two of “the yellow one” squished smoothie fruit pouches, so I figured I’d start there. Different flavors would have resulted in a battle of course. Anyway, gave one to 6-year-old Bug and one to 4-year-old LadyBug and waited for the verdict. Bug sucked his down in record time and promptly asked for another one. LadyBug took a bit longer, but also finished hers and asked for more. I said no to that for now, but promised that they could have some in their lunchboxes. I pulled out the rest of the samples and they began fighting over the different varieties. I did manage to divvy them up evenly and tucked the true baby flavors away (apples and rice, the aforementioned rutabagas, etc.). They can eat them if they’d like, but otherwise I’ll give them to friends who have a new baby.

Anyway, it was a positive verdict from the kids. What I like about Ella’s kitchen is that they’re organic with no added sugars or preservatives. There’s not even any water added. There’s no wheat, gluten or lactose, and, of course, no nuts. They’re also super portable and easy for both little and bigger kids to eat on the go. They have a twist off top and a small opening that kids can use to eat from. You can also squeeze the fruit out into a bowl or mix with other foods. So convenient! Yeah, not in love with the convenience packaging, but it’s certainly not as bad as some products. They’re also a little pricey. The smaller smoothie pouches (3 ounces) cost almost $1.50 each at stores in my area. I’m not saying they aren’t worth it given the ingredients, but still just may not be in your budget. We’ll probably pick some up for lunchboxes and travel snacks, but they won’t be everyday treats.

Disclosure: We received free samples of Ella’s Kitchen products. There was no promise of a positive review and the opinions contained in this post are my own. Image courtesy of Ella’s Kitchen.