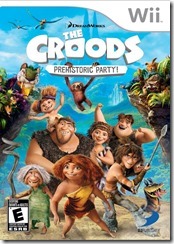 When I first saw the ad for The Croods from DreamWorks Animation, I was skeptical. Cave men aren’t really my thing. But having seen the full trailer and read some reviews, I’m kind of excited to take the kids. It looks like a fun movie (it opens on March 22). And what better way to bring a fun movie home with you than by playing the video game or trying out the app? I’m happy to be giving away two The Croods digital entertainment packs. Each one contains The Croods: Prehistoric Party for the Wii and a $15 gift card to the iTunes App Store. The Croods app is free, so the gift card can be used for in-game purchases or to build out your app library.

The Croods: Prehistoric Party is available for Wii, Wii U, Nintendo DS, and Nintendo 3DS. In the Wii game, you can can choose your character from any one of the family members. The Wii version of the game allows for multiplayer action for up to 4 players. It’s a mini-game experience with 30 different games. It’s available on Amazon 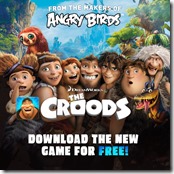 The Croods App for iOS and Android

The Croods app is from Rovio, the folks behind Angry Birds. It’s a resource collecting/building app similar to other online casual games. You trap animals, domesticate them, and then use the resources they provide such as carrots and feathers. There are challenges to complete using the collected resources. The Croods is a freemium game. It is free to play, but you may be drawn to buy additional resources to keep the game moving. Of course, you could have an iTunes card to cover your gaming addiction! Either way, this is a cute way to extend your The Croods experience beyond the theater. Here’s the app trailer:

To win, just let me know who you’ll be sharing this gift pack with and don’t forget to claim all of your Rafflecopter widget entries.

Down the Rabbit Hole with Hohokum [Video Game Review]

24 Responses to The Croods Video Game and App Giveaway