If I were to imagine a trip to Alice’s Wonderland, replete with a conversation with the Cheshire Cat and directional signs pointing in opposite directions, it would look a lot like Sony’s latest puzzle adventure, Hohokum. This collaboration between game developer Honeyslug and artist Richard Hogg is colorful, odd, compelling, and at times utterly frustrating. With more than a dozen levels to play, it’s not the longest game out there, but it certainly is a beautiful one. 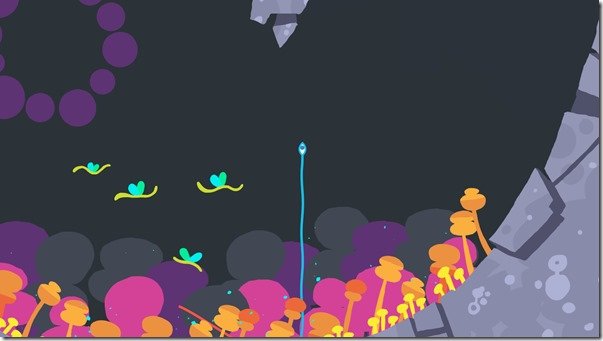 Hohokum drops you into a mysterious world where you take on the character of a “Long Mover,” what the developer describe as “a kite-like being.” I’d say that at best, it looks like an eye with a tail, a worst, a sperm. Either way, these creatures skim gently through most of the scenery, changing color to reflect the direction they are heading. If you’re using a PlayStation 4 controller, it will also reflect the color.

Your Long Mover doesn’t do much. It can touch objects, and carry other creatures on its back. You can never be sure what it will interact with, so don’t overlook anything, even if it looks like a static backdrop. In addition to the puzzles you’ll be working on, there are more than 150 creepy little eyes to discover. Once opened, their gaze will follow you everywhere you go. It’s just one of the many things that makes this game unique. In the screen shot below, my Long Mover has found a hidden eye masquerading as a leaf in a gray forest of hollowed-out logs.

Hohokum has nabbed an E10+ rating (for crude humor and comic violence), but the artwork is obscure enough that it’s not always obvious what’s going on. In one scene, your kite may pass an electric wire and get a jolt. If so, any creatures on your back will be electrocuted. In reality, they turn black and fall off in a very non-dramatic way. Everything is playful and dreamlike. It’s hard to even compare it to other E10+ franchises (i.e. the LEGO games, Disney Infinity, Skylanders, Ratchet & Clank).

Like other puzzle adventure games, you’re given very little guidance. This isn’t the right type of experience for everyone; you just need to be open to exploring with the understanding that there isn’t a wrong result. You can’t die, and you can’t mess it up. On the other hand, sometimes you need to stumble across the solution and it can take a lot of time depending on your frame of mind. I read an interview with one of the developers (which, sadly, I can’t find) where they said that if you don’t know what to do, keep exploring and the answer will become clear. Very Zen, for better or worse. 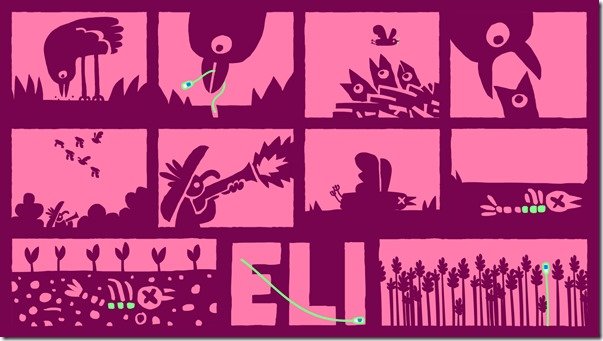 In terms of family-friendliness, Hohokum has some pros and cons:

My kids caught sight of me trying the game out and my son (age 8) immediately wanted to play. We’ve been enjoying helping each other out with the puzzles, finding hidden eyes, and laughing at some of the silly humor. I have completed most of the game in two days (I have two puzzles that I’m still working on, but I’m almost there!) after playing maybe 6-8 hours. If I were an obsessive person, I might go back and seek out the rest of the 150+ hidden eyes, but I don’t know if that will happen.

Bottom line, Hohokum is fun, even for little kids to explore. It’s a bit more challenging to figure everything out, but there are some levels that are quick and easy.

Disclosure: We received a copy of Hohokum for review purposes. There was no additional compensation and the opinions above are my own.