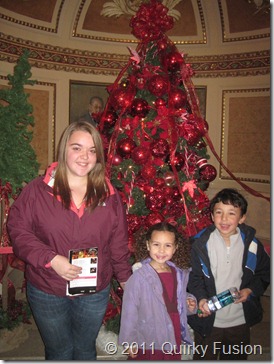 If you have never seen the Radio City Christmas Spectacular, you’d probably think I was crazy for taking my 15-year-old niece, along with Bug (6) and LadyBug (4). You may have no idea what I’m talking about, or you may be envisioning lots of legs kicking as the Rockettes strut their stuff. Yes, there was plenty of kicking involved, but there was also a lot more. So much so that all of the kids were captivated from beginning to end. The show is pure magic.

The Spectacular is at the Wang Theater, which is a beautiful space. We were seated in the dress circle, which was a bit removed from the action, especially at the 5pm performance on a Friday. It worked out well, though, because it gave the kids room to stretch and no one could hear when LadyBug exclaimed excitedly over every thing that happened on stage.

I don’t want to ruin the surprises, but I’ll give a quick overview. The show is narrated by Santa, who flies on his sleigh to Boston and then takes us on a special journey that includes a visit New York City, the Nutcracker Ballet, and even back to the North Pole. Every scene is magic-filled in large part due to a 50-foot LED screen that serves as an ever-changing backdrop. 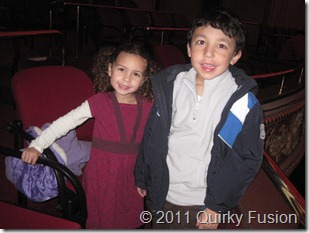 Every dance number is a spectacle unto itself and the story moved along quickly enough to keep my kids from getting restless. The show is 2 hours long with a 15-minute intermission which arrived at just the right time. We took a bathroom break and bought some snacks. The kids looked around the theater for a bit and were then eager to see the second half of the show.

I’m pretty sure that most of the seats in the house are wonderful, but there is something to keep in mind when you’re purchasing tickets. Some of the characters walk through the audience on the floor, which is typically pretty cool for kids. They also (*spoiler alert*) shoot confetti canons into the audience at one point. I was completely unprepared for it and I imagine that some of the kids in the orchestra seating might have been scared half to death. On the other hand, the kids on the floor seemed to have fun collecting the streamers when all was said and done. We were too far up/back to be in the midst of any of that, which I had mixed feelings about. If you have a kid with sensory issues, especially noise, that might have sent them over the edge.

There is still plenty of time left to nab tickets to the Radio City Christmas Spectacular in Boston. The show runs through the 28th. Unfortunately, my giveaway is over, but I’ve got a discount code that’s still available in that post. I can’t recommend it enough as a family holiday event.

Disclosure: We were given complimentary tickets for the purpose of writing a review. There was no promise of a positive review and the opinions in this post are my own.

This Is the Christmas that Never Ends…

It’s Beginning to Look Twice as Much Like Christmas…
← Gift Baskets for People Who Have Everything
Do Apps Really Help Kids Learn? →