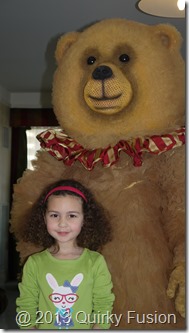 Last year, LadyBug and I were treated to a tour of the Nutcracker Suite at the Ritz-Carlton in Boston. We were both captivated by the magic of it (it even inspired one of our Christmas presents that year), but I had context and LadyBug did not. The tutus, Nutcracker and giant bear were all just props to her. She knew nothing of the ballet or the music. I thought she was a bit young to sit through the whole ballet and we couldn’t fit it in our schedule anyway.

This year, when the Boston Ballet offered us tickets to The Nutcracker for review, I jumped on it. I thought it would make a great mother-daughter evening and I hoped she would be old enough to sit through the production. I distinctly remember being so, so excited to see the Nutcracker as a child and then being bored to tears in the second act. Note to parents: While a wonderful story and an iconic musical soundtrack, it was certainly not written with kids in mind. The first act is a magical story with a party and peril and plenty to latch onto. The second act is a series of dances that are a bit hard to enjoy if you aren’t passionate about ballet. And that is my cue to to give my first praise to Mikko Nissinen, Artistic Director for the Boston Ballet. A well-integrated cast of talented young  people help keep the attention of kids in the audience. In fact, they often steal the scene from their more seasoned counterparts.

And while the dancers are exquisite, it doesn’t stop there. The sets and costumes are sumptuous, giving plenty to feast your eyes on if they stray from the dancing. The Sugar Plum Fairy and Dew Drop costumes are encrusted with 3600 jewels. You can tell from well into the audience. The Christmas tree (covered in 600 ornaments and 766 lights) grows from 16 feet to over 42 feet tall. None of it was lost on LadyBug who enjoyed every moment of the magic.

While I wouldn’t recommend the Nutcracker for kids under the age of 6, it is certainly delightful for kids who relish in detail, love dance, and/or seek out magic. There were plenty of younger children in the audience, all dolled up in their best holiday attire, but I imagine they were pretty restless (or asleep) before it ended. Still, it’s a wonderful holiday tradition for families and I expect that LadyBug and I will return again in years to come.

Disclosure: We received complimentary tickets to the performance for review purposes. There was no additional compensation and the opinions in this post are my own.

A Tour of the Nutcracker Suite at The Ritz-Carlton, Boston Common

Play Nice(r) With Your Phone, Your Xbox, and Xbox SmartGlass

One of Those Days