I love Halloween decorations, and I love technology, so when AtmosFX asked me to check out some of their products, I was just a little excited. AtmosFX sells holiday decorations that come to life and they are really pretty amazing. I was a bit skeptical, but everyone who has seen them has been impressed. 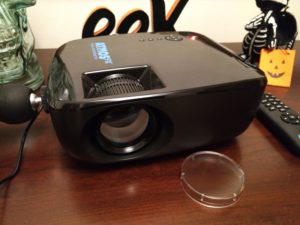 The first step in creating these realistic Halloween decorations is to get a projector. You can use your own, but AtmosFX sells two projects in bundles. I received the Digital Decorating Kit, which includes an SD projector, a small tripod for vertical projections, projection material for a window (see below), and 14 sample scenes to get you started. They also sell the Digital Decorating Kit Plus, which is very similar, but with an HD projector. It does not include a tripod, but I believe that projector can stand on its side without an aid.

If you’re ready to go out and buy right now, I can say that the SD projector does a great job. I’m sure the clarity could be better with the HD projector, but you don’t necessarily need or want that for Halloween decorations. Trust me. These are spooky just as they are. I appreciated that the projector has the basics such as keystone correction (this allows you to square off the image, even when projected at an angle) and focus. It comes with a remote control, which would be amazing, but the IR receiver is in the back of the projector and frequently not accessible from where I am standing. That is probably my biggest frustration out of everything we tried. The only other complaint I have is that the tripod doesn’t hold very well. If I try to tilt the projector much more than a few degrees, the tripod gives ways and flops over. I wasn’t expecting an extreme tilt, but it would be nice if it held up a bit more.

AtmosFX also sells something called Hollusion Projection Material, which is a semi-transparent material for use in doorways and the like. The material is intended to give the illusion (ahem) that something is floating in the room as you can still see objects in the background.

The last projection surface AtmosFX sells is the 3DFX form. It’s an inflatable form draped in gray fabric that makes it look like creatures are standing in your room or yard. Blown up, the 3DFX form looks like a giant (over 5.5 feet) punching bag. I had to convince my family to leave it alone. But once it’s all set up, spookiness ensues. I’ve got two pictures below to show you how it works. The first is with some ambient lighting, so you can see the outline of the form. The second is in darkness and you can hopefully tell how the image just sort of floats there, but with more of a body than a flat image would provide. It’s like Halloween decor on steroids. I’m still plotting how to set up one of these in my yard because it’s really a stunning effect. 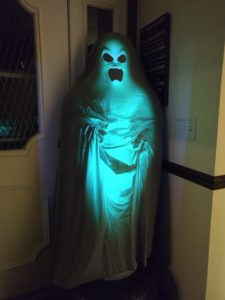 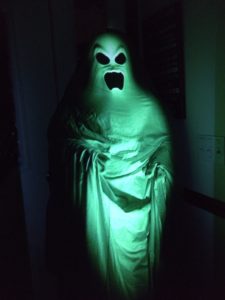 All of the projectors and screens in the world would be useless without some amazing content. That’s really where AtmosFX shines. Their library of holiday animations – some family friendly, some not – are meant to be shown on TV screens, projected in windows, displayed on 3D forms, or floated in doorways. They come in horizontal and vertical displays, and they each have their own creepy sound effects and music. There are even animations for other holidays like Christmas, Valentine’s Day and the 4th of July. It was hard for me to choose, so I focused on more family friendly imagery as that’s our niche. Plus, I don’t want to terrify my trick-or-treaters. As it is, I demoed of some of the content with my son’s 6th grade friends during a nighttime Nerf war, and they were sufficiently creeped out. Halloween decor success!

Disclosure: We received a selection of AtmosFX gear and content for the purposes of a review. There was no additional compensation and all opinions are our own.