Last night, my dad and I slogged through rain and flooded streets to get my kids to see Rudolph the Red-Nosed Reindeer: The Musical in Boston. We could have used a sleigh with some reindeer assistance because the traffic was awful and we ended up a few minutes late. Luckily, we zipped into the theater just as “Holly Jolly Christmas” was beginning. I know I mentioned in my last post about Rudolph that they were trying to stick as closely as possible to the TV version, but even I was surprised at how faithful a rendition it was. 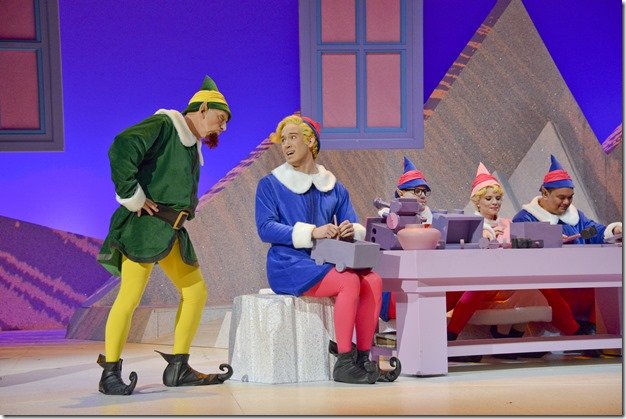 If you think to your favorite Rudolph character and all of the things that you love about him or her, whether it be the costume, the voice, or the mannerisms, the talented actors and puppeteers have it taken care of. From Hermey’s somewhat squeaky voice and elaborate blonde hair to Rudolph’s nasally complaints about a fake nose, it felt very much like watching the television special. The elves were petite and yet full of animated joy (with the exception of the grumpy Boss Elf whose stereotypical New York accent rang true).

All of the non-human/elf/reindeer characters are played by puppets. It was fun to watch the puppeteers in their white costumes (at least one zipping around on Heely’s roller skate sneakers) take on a variety of roles from Yukon Cornelius’ dog sled dog to a pair of adorable raccoons. But they also had some special roles, like moving the ice floe with Rudolph, Hermey, and Yukon aboard. And then ensuring that the ice floe did not move as the trio do an active rendition of “Fame and Fortune” (a song that has been cut from and added to the broadcast several times in the past 50 years). 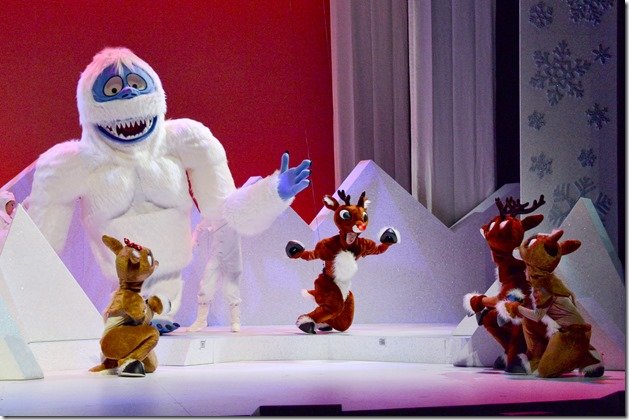 The show seems well-cast overall, but I had a hard time buying Jason Michael Hammond as Santa. He is talented and his acting was wonderful, but the skinny Santa approach doesn’t work quite as well in live theater as it does in an animated short. I  thought he looked like a young John Malkovich masquerading as the jolly old elf. In the same vein, Mrs. Claus looked more like Santa’s daughter with a young actress and black hair rather than the dark grey she sports in the television special. I doubt my kids noticed, but with so much attention paid to the realism, it stood out to me. All of the other details were spot on, down to the pink spotted elephant and the train with square wheels. The recreations were amazing. 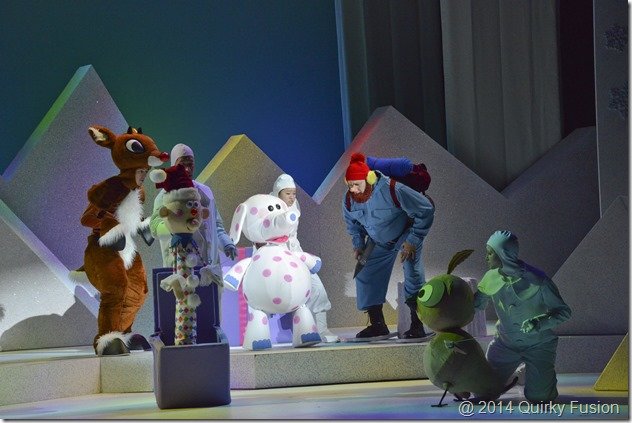 If you’re not sure how your kids will fare in a live theater setting, this is the perfect show to try it out. At just an hour and a half, including a 15 minute intermission, it’s shorter than a movie. The audience was primarily families with young kids, so the crowd is more forgiving when your child’s stage whisper can be heard several rows ahead. Do be warned that the Abominable Snow Monster has a formidable roar which some kids might find a bit scary. If you can prep little ones by watching the TV special first, they might have an easier time following the story, and knowing that all will be well in the end.

This show is on a short run, so get your tickets now if you’re interested.

Rudolph the Red-Nosed Reindeer: The Musical plays at the Citi Performing Arts Center Shubert  Theatre, 265 Tremont St., Boston,Tuesday, December 9 – Sunday, December 14, 2014, for 12 performances: Tuesday through Saturday evenings at 7:00 pm; morning matinees on Thursday, Saturday and Sunday at 10:00 am;  and afternoon matinees at 1:00 pm and 4:00 pm on Saturday and Sunday.  Tickets are priced at $28.00 – $68.00; all prices include a $3.75 facility fee per ticket and are on-sale  at www.citicenter.org or by calling (866) 348-9738. Groups of 10 or may reserve tickets now by contacting Citi Performing Arts Center Group Sales at(617) 532-1116or groups@citicenter.org   For more information, visit www.citicenter.org

Disclosure: We received tickets for the purposes of this review. There was no additional compensation and all opinions are my own.