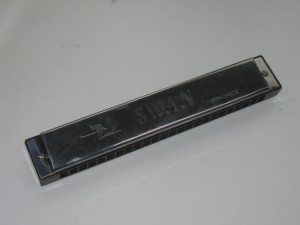 Bug received a harmonica as a party favor last week. It’s a real harmonica and could have been my worst nightmare, except that I love that my son loves music. Music is important to me and has been a constant part of both of my kids’ lives since the earliest days of my pregnancies. So, when Bug pulled the harmonica out of the box and immediately started playing a bluesy tune, I was delighted. We can all use some blues in our lives, you know?

Of course, Bug is three and so his harmonica playing isn’t all that advanced just yet. Even so, I applaud loudly when he completes a song and ask him what he calls it. He names the first piece “Claire Over the Moon.” A reference to Clair de lune? It’s possible, knowing Bug, although I can’t figure out how he’d know the name. The next two pieces were, “Claire Over the Sun” and “Music on a Chair.” As it turns out, the titles are just as much fun as the music!

If you haven’t introduced your children to music – REAL music – you really should. Kids need more than dumbed-down music in their lives. Sure, Raffi is fun for them to sing along, but they can use a little complexity as well. Besides, who wants to listen to “Baby Beluga” all day? LadyBug goes to sleep each night to Mozart’s Violin Concertos (and not the awful Baby Einstein version). She calls him “Shushart.” The kids are familiar with show tunes, gospel, oldies, folk, international (Irish, South African, Reggae, etc.) and a variety of other things. Don’t be afraid… put some music on, sing, dance, and let out some creative energy. My kids love singing so much that they make up their own songs, sometimes based on melodies they already know and sometimes entirely original. And, you know what? My kids really do sing the prettiest songs!

One of our favorite children’s CDs is Putumayo for Kids Animal Playground (affiliate link). My favorite song on there isn’t really a kid’s song at all. This is “The Littlest Birds Sing the Prettiest Songs” and it’s by the Be Good Tanyas. Here’s the video:

This song makes me happy, just as listening to my own kids’ music makes me happy. And it’s proof that kids and adults can enjoy the same tunes. You need only listen to “Baby Beluga” if it makes you joyful too!

Celtic Woman: Songs From the Heart

Jazz Up Your Day with Funky Kidz

Crooning With Harry Connick Jr. and Your Songs

If You’re Happy and You Know It Video for Kids

Sex in the City 2 Soundtrack – A Review